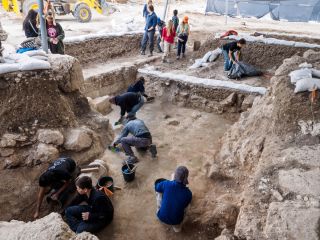 The ruins of a 1,500-year-old church were unearthed during salvage excavations in Israel.
(Image: © Israel Antiquities Authority)

The remains of a 1,500-year-old monastery and church, complete with a colorful mosaic floor, have been unearthed in Israel.

The Israel Antiquities Authority (IAA) announced that the Byzantine monastery (the complex where the church was located) was uncovered during salvage excavations taking place ahead of construction in Beit Shemesh, a city west of Jerusalem.

"During the excavation, we uncovered before our eyes the remains of walls built of large worked stone masonry and a number of architectural elements, including a marble pillar base decorated with crosses and marble window screens," Benyamin Storchan, director of the excavations, said in a statement. [See Photos of the Byzantine Church Remains]

The marble was not from a local source, but rather it had been shipped from Turkey, Storchan explained. In one of the church rooms, the team revealed "a beautiful mosaic floor decorated with birds, leaves and pomegranates," Storchan said in a statement. In a related IAA video, Storchan said that the church likely "enjoyed a great deal of wealth in ancient times."

Among the artifacts found during the excavations were a small bronze cross that may have been part of jewelry and ceramic oil lamps blackened by ancient charring.

The church seems to have been abandoned in the seventh century during the early Islamic conquest, Storchan said, but the researchers are still trying to figure out why the church went out of use.

Compared with other churches found in the Judean Shephelah or Judean foothills, Storchan said "this one has outstanding preservation" and it is one of the largest found in the region. "Often we only find little pieces of it, and we're uncovering it complete."

Christianity spread throughout Israel after the Byzantine Empire formed in the fourth century, Storchan said, and those early churches were often associated with biblical sites, or tombs of saints and martyrs. Just south of the church is the Ella Valley, which, according to the bible, is the place where David fought Goliath.

"Maybe they had a notion that this is the valley," Storchan said in the video. "All this is speculation, but it's completely possible."