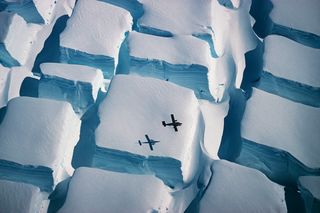 Antarctica isn't just a land of ice — sometimes, in some places, it appears to be a land of giant ice cubes. But why? How do these huge, rectangular formations appear in the inhuman, irregular landscape of the southern continent?

The image above, titled "Icy Sugar Cubes," was taken in Antarctica in 1995, over the English Coast on the southern Antarctic Peninsula. The British Antarctic Survey recently scanned the photo, which was initially shot on Kodachrome 64 slidefilm, and in 2017, it won the overall top prize in The Royal Society's annual scientific photography competition. The "unusual bi-directional crevassing" emerged, The Royal Society explained in a caption, "as an ice sheet … stretched in two directions over an underlying rise."

But that's not all that's going on in that photo, according to Ted Scambos, a glaciologist and lead scientist for the National Snow & Ice Data Center science team. [See the Winners of the Royal Society Photo Competition]

The photo appears to represent an area of "fast-flowing and floating ice," Scambos wrote in an email to Live Science.

Although Antarctica's enormous masses of ice may look solid to human eyes, the reality is that they're in constant motion, flowing and bumping and grinding against one another. That motion causes patterns to appear — not through carving but rather a long period of pulling.

"A massive slab of flowing ice begins to go afloat," Scambos wrote, "and initially, because it is very thick, it spreads laterally [side to side], creating deep along-flow troughs. Later, with further flow, the ice begins to stretch out longitudinally, and the surface snow breaks perpendicular to the first troughs."

In other words, as the ice spreads and thins, it cracks. First, the cracks appear parallel to the ice's forward motion, creating a series of horizontal crevasses. Later, another series of cracks appears perpendicular to the direction of the ice flow, completing the weirdly regular grid, Scambos said.

The image offers clues that can help researchers like Scambos guess the direction in which the ice was flowing.

"Note that the troughs that run more perpendicular to the aircraft are a bit older, more full of snow — I would guess that they are parallel to the flow direction," Scambos wrote.

Because those slices have been around longer, more snowstorms have passed over them, filling them up.

"The sharper cuts to make the blocks, more in the direction of the plane's flight, are younger, and mark a transition someplace just upstream to more extensional conditions," Scambos wrote.

In other words, the ice was likely flowing along the paths of the shallower slices, and the deeper, sharper slices appeared more recently. The Antarctic ice, solid as it looks, hides literal gigatons of mysterious forces and movements.