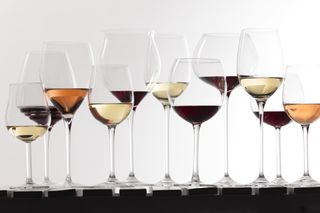 This holiday season, will you view the glass as half full or half empty? Well, that might depend on the size of the glass. A new study from England finds that over the past three centuries, wineglasses in England have ballooned in size, from holding the equivalent of a double shot of liquor to holding nearly two cups of liquid.

In the study, researchers at the University of Cambridge looked at the size of glassware over 300 years to see if there were any links between glass size and alcohol consumption. The findings were — one might  say — glass-shattering: From 1700 to 2017, the size of wineglasses increased almost sevenfold. More recently, wine consumption also went up, with intake quadrupling between 1960 and 1980 and then doubling between 1980 and 2004.

The study was published yesterday (Dec. 13) in the Christmas issue of the journal The BMJ, which is a tongue-in-cheek edition of the medical journal, which normally publishes serious research. [Here's How Much Alcohol Is OK to Drink in 19 Different Countries]

But how do you measure the average size of a wineglass in 1700? To do so, the researchers looked everywhere, including the archaeology department at the University of Oxford, the designs of the Royal Household, and various department stores and catalogs. They even checked eBay. In some cases, the sizes of the glasses were listed, but for the rarer and older models, they had to manually fill the antiques with water to measure how much they held.

At first, the reasons for the increase in size were technical. Certain advances — including the invention of lead crystal glassware (which is less fragile), automated manufacturing and the abolishment of the glass tax in the U.K. — made it cheaper to produce larger wineglasses.

But ultimately, the biggest factors in the growing size of the wineglasses may be cultural, according to senior study author Dame Theresa Marteau, a psychologist and the director of the Behaviour and Health Research Unit at the University of Cambridge. Most likely, because of changes in the "affordability, availability and marketing" of wine, people and industries began to want and use larger glases.

Americans may also be to blame (or thank) for the increase in size in England's wineglasses: British manufacturers cite demands for supersize glasses by the U.S. market in the 1990s.

But does a larger glass really cause you to drink more? Though the researchers noted that the study does not prove cause and effect, a larger container size for other food products has been associated with increased consumption, and previous research has linked alcohol consumption and cup size.

The reason for this isn't simply that people pour more wine with a larger glass, Marteau told Live Science. Instead, perception may play a role — you believe you're drinking less with a larger glass — as well as enjoyment, as larger glasses can potentially release more of the wine's aroma.

Marteau added that the study caused her to notice the increase in size of her own glassware over the past several decades and, as such, shift back to the smaller sizes.