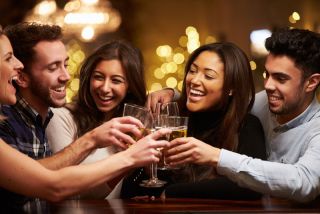 Across the world, women now consume nearly as much alcohol as men do, according to a new study.

The findings show that the gap between men's and women's drinking habits is closing. This is particularly true for women born in the last 15 to 25 years, the researchers said.

"Alcohol use and alcohol use disorders have historically been viewed as a male phenomenon," the researchers, from the University of New South Wales in Australia, wrote in the Oct. 24 issue of the journal BMJ Open. "The present study calls this assumption into question" and suggests that efforts to reduce the harms of alcohol use should include young women, the researchers said. [Here's How Much Alcohol Is OK to Drink in 19 Countries]

In the new study, the researchers analyzed information from more than 4 million people living in countries around the world, who were born as long ago as 1891 and as recently as the year 2000. The data came from 68 previously published studies that compared men's and women's drinking patterns.

Men and women have also become more similar in their rates of problematic alcohol use (such as binge drinking) and their rates of experiencing harm from alcohol (such as alcohol dependence).

"[These] findings confirm the closing male-female gap in indicators of alcohol use and related harms," the researchers said.

The researchers noted that their study was not designed to determine whether the closing gap is due to women drinking more alcohol or men drinking less alcohol. But most of the studies suggested that the convergence of men and women's drinking habits was driven by a greater use of alcohol among women.

The findings also highlight the importance of continuing to track the drinking habits of young adults as they age into their 30s, 40s and beyond, the researchers said.