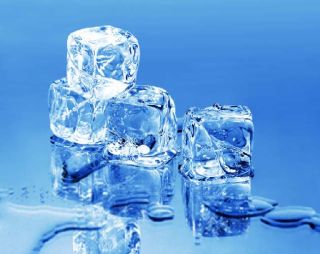 Imagine water freezing solid even as it's heating up. Such are the bizarre tricks scientists now find water is capable of.

Popular belief contends that water freezes at 32 degrees Fahrenheit (0 degrees Celsius). Surprisingly, if water lies in a smooth bottle and is free of any dust, it can stay liquid down to minus 40 degrees F (minus 40 degrees C) in what's called "supercooled" form. The dust and rough surfaces that water is normally found in contact with in nature can serve as the kernels around which ice crystals form.

Now researcher Igor Lubomirsky at the Weizmann Institute of Science in Rehovot, Israel, and his colleagues have discovered another way to control the freezing point of water — via what are called quasi-amorphous pyroelectric thin films. These surfaces change their electrical charge depending on their temperature.

When pyroelectic surfaces are positively charged, water becomes easier to freeze, and when they have a negative charge, it becomes harder to freeze.

The researchers saw that supercooled water could freeze as it's being heated, as long as the temperature changes the surface charge as well. For instance, when supercooled water is on a negatively charged lithium tantalate surface, it will freeze solid immediately when the surface is heated to 17.6 degrees F (minus 8 degrees C) and its charge switches to positive.

"The difference between the positive and negative charge was unexpected," Lubomirsky said.

The ability to better control the freezing temperature of supercooled water could be critical for a variety of applications, including the survival of cold-blooded animals, the cryo-preservation of cells and tissues, the protection of crops from freezing, and the ability to understand and trigger cloud formation.

The scientists detailed their findings in the Feb. 5 issue of the journal Science.