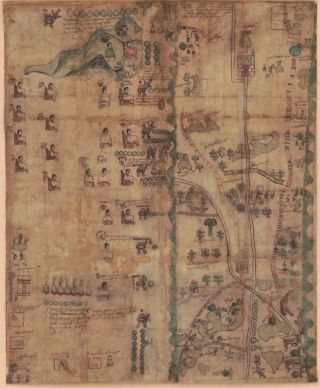 This 1593 map shows southern Puebla from the church of Todos Santos (now northeast of Mexico City) and Lake Texcoco, to the church of Santa Cruz Huitziltepec, Pue (lower right). The map also reveals the genealogy and land ownership for the Nahuatl "de Leon" family from 1480 to 1593.
(Image: © Library of Congress, Geography and Map Division)

A rare, indigenous-made map of Mexico from the era of the Nahuatl people's first contact with Europeans is now in the collection of the U.S. Library of Congress.

The library announced yesterday (Nov. 21) that it acquired the so-called Codex Quetzalecatzin(also known as the Mapa de Ecatepec-Huitziltepec) and that a digitally preserved copy is now online.

For more than 100 years, the map had passed through private collections, including that of newspaper mogul William Randolph Hearst. [Cracking Codices: 10 of the Most Mysterious Ancient Manuscripts]

According to the Library of Congress, few manuscripts of this kind have survived into the present, and the codex, created in 1593, is a rare example of the many maps that were produced for the Spanish Empire to document the histories of local families —and their resources.

The manuscript shows the genealogy of the members of the "de Leon" family, indigenous Nahuatl people who were descended from a political leader named Quetzalecatzin. The map also illustrates the land and property this family owned, using Aztec-style graphic symbols for riversand roads, and hieroglyphic writing.

But there are also traces of Spanish influence in the manuscript. Some hieroglyphic labels are translated with the Latin alphabet. The names of indigenous elites —like "don Alonso" and "don Matheo"—imply that some locals had been baptized with Christian names.

The map also "shows churches, some Spanish place names and images suggesting a community adapting to Spanish law and rule," said John Hessler, curator of the Jay I. Kislak Collection for the Archaeology of the Early Americas of the Library of Congress.

"The codex shows graphically the kinds of cultural interactions taking place at an important moment in American history," Hessler said in a statement. "In a sense, we see the birth of what would be the start of what we would come to know as the Americas."

The map covers some recognizable geographic terrain. It features the church of Todos Santos in modern-day Mexico City suburb of Ecatepec, the now-drained Lake Texcoco and the Atoyac River.