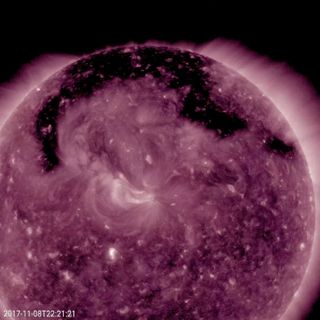 The ominous black feature encroaching on the sun in this ultraviolet image is simply a region of low density in the star's atmosphere.
(Image: © NASA/GSFC/Solar Dynamics Observatory)

A large, dark "hole" has opened up in the sun's atmosphere, allowing solar winds to rush out into space — an ordinary occurrence, but a spectacular one to see.

NASA's Solar Dynamics Observatory captured this ultraviolet image of the coronal hole on Nov. 8, with the space agency releasing the image Monday (Nov. 20).

Broad holes can open up in the sun's upper atmosphere, or corona, as a result of the star's dynamic magnetic field, according to a NASA statement that accompanied the image. Just as the magnetic field's kinks and bends can cause sunspots and solar flares, they can also open temporary holes in the corona. Like the hole in the ozone layer on Earth, a coronal hole doesn't actually go through the sun's atmosphere. It's simply a region that is cooler and less dense than the surrounding plasma. [The Sun in HD: Amazing Photos by the Solar Dynamics Observatory]

The opening in the magnetic field allows particles to escape much faster than in normal solar wind, according to the Space Weather Prediction Center (SWPC). These high-speed streams can cause disturbances in Earth's magnetosphere that jeopardize satellites and power grids. The high-energy particles can also supercharge the planet's auroras, the northern and southern lights. This hole was probably the source of vibrant auroras that appeared earlier this month as far south as Nebraska, NASA officials said in the statement.

Many of us take the sun for granted, giving it little thought until it scorches our skin or gets in our eyes. But our star is a fascinating and complex object, a gigantic fusion reactor that gives us life. How much do you know about the sun?

Solar Showdown: How Well Do You Know Our Sun?