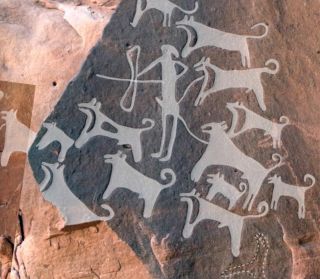 This composite image of a panel of rock art discovered in Saudi Arabia shows a hunter with 13 dogs (right side) and a few possible leashes extending from the hunter's waist, and a scene with a hunter, a large equid and eight dogs (left side). The top image shows the engravings traced in white.
(Image: © Journal of Anthropological Archaeology/Maria Guagnin/Max Planck Institute for the Science of Human History)

Etched into the rock walls of dried-out valleys and slopes in the Arabian Peninsula, the 8,000-year-old hunting scenes even feature some dogs on leashes. Those images —the oldest archaeological evidence of dog leashes —suggest humans were controlling and training dogs even before they settled down into farming communities.

The dog carvings come from the rock-art sites of Shuwaymis and Jubbah in northwestern Saudi Arabia. While documenting thousands of rock-art panels there, Maria Guagnin, an archaeologist at the Max Planck Institute for the Science of Human History in Germany, counted 156 dogs at Shuwaymis and 193 at Jubbah.

Similar to the modern Canaan breed in their appearance, the dogs in the engravings have pricked ears, short snouts and curled tails —and they look distinct from the hyenas and wolves depicted elsewhere in the rock-art panels, according to a study by Guagnin and her colleagues, published online Nov. 16 in the Journal of Anthropological Archaeology, as first reported by Science magazine. [What Your Dog's Breed Says About You]

The dogs are often shown helping humans hunt lions, ibexes, gazelles, horses and other prey. Some dogs in the hunting packs are on leashes, tethered to the waists of hunters (whose hands are then free to shoot arrows). The researchers speculated that these leashed dogs might represent young dogs in training, older ones at risk of injury or valuable scent dogs.

"This suggests not only are some human populations controlling their hunting dogs by the Pre-Neolithic, but that some dogs may perform different hunting tasks than others," Guagnin and her colleagues wrote. "Some may be used only to track prey scents, while others are used to corral and attack prey, protect human hunters, or help haul meat back to camp."

Genetic and archaeological evidence suggests that dogs were domesticated from a gray wolf ancestor at least 15,000 years ago, and perhaps as early as 40,000 years ago. Archaeologists still debate when and where this took place, and how humans controlled dogs or used them for activities like hunting in prehistory.

The rock-art sites of Shuwaymis and Jubbah fill in a piece of that puzzle. The images have not been directly dated, but Guagnin has estimated that they date back 8,000—or possibly even 9,000 —years, to the pre-Neolithic era, before farming got its start. That would mean domestic dogs were in the Arabian Peninsula much earlier than previously believed. (The oldest dog remains ever found in the region date to the fourth millennium B.C. in what is now Yemen.)

The images also rival 8,000-year-old paintings of dogs on pottery from Iran, previously thought to be the oldest depictions of dogs. Additionally, the hunting scenes represent the earliest known evidence of dog leashes in the archaeological record worldwide, the study claims.