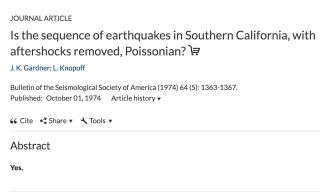 A screenshot of the 1974 paper shows the super-short abstract.
(Image: © Bulletin of the Seismological Society of America)

Sometimes, you follow the strict, formal rules of expression in your profession. And sometimes you wing it, just because you can.

In 1974, a pair of seismologists writing for the Bulletin of the Seismological Societ of America did something just because they could. They wrote a formal introduction, or abstract, for their paper "Is The Sequence Of Earthquakes, With Aftershocks Removed, Poissonian?" The abstract, which resurfaced on Twitter thanks to inventor and science-tweeter Cliff Pickover, consists of one word, and only three letters: "Yes."

Abstracts go at the top of just about every research paper published in fields ranging from psychology to physics to entomology to — yes — seismology. They summarize all the complicated methods, results, and interpretations that follow, often in plainer language. Reading abstracts is a great way for researchers, curious lay people and the occasional science journalist to follow developments in fields where they're not experts. Abstracts are also often the only part of a paper available to the public without paying journal subscription fees. [10 Weird and Terrifying Medical Instruments from the Past]

And this super-short abstract by J.K. Gardner and L. Knopoff does the job. Were all those SoCal earthquakes, with aftershocks removed, poissonian — which is to say, were they essentially random in their occurrence? Yes, they were, the abstract reveals.

It's of course not certain that "yes" is not the shortest abstract ever published. (There could after all be a paper squirreled away out there somewhere with an abstract "no.") But neither Live Science nor the scientists who shared this paper on Twitter recently could find any shorter examples.

As recently as November 2015, Pickover did share a paper with a slightly longer abstract: The Journal of Physics A: Mathematical and Theoretical ran a paper in 2011 with the title "Can apparent superluminal neutrino speeds be explained as a quantum weak measurement?" and the abstract "Probably not."