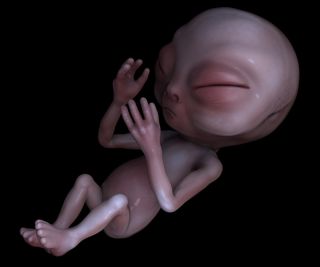 What would life in a far-flung star system look like? Would humans even recognize it as life?

A new theory says yes, we would. In fact, life on other planets (or moons, or asteroids) might look surprisingly similar to life here on Earth, University of Oxford scientists wrote in a paper published in the International Journal of Astrobiology on Oct. 31. That's because life on other planets would likely be subject to natural selection, just like life on Earth is. And if life is subject to natural selection, it is likely to share similarities, even if it isn't carbon-based, for example, or codes its operating instructions in a way entirely different from DNA.

"Living things are adapted," study co-author Samuel Levin, a doctoral candidate in zoology at the University of Oxford, wrote in an email to Live Science. "They appear to be 'trying to do things' like eat, survive, grow, reproduce."

The only way to adapt, Levin said, is through natural selection, the process through which hereditary variation among individuals leads to differences in success, and ultimately survival of the fittest.

"Anything that will stand out to us as alien life will have undergone natural selection," Levin said. [Greetings, Earthlings! 8 Ways Aliens Could Contact Us]

Taking natural selection as a starting point, Levin and his colleagues asked what that reveals about how aliens might look. This is a theoretical approach to the question, Levin said. Many astrobiologists take what's called a "mechanistic" approach, looking at how life has evolved on Earth — say, around deep-sea vents — and try to apply that to the environments of distant planets. Mechanistic predictions have their strengths, Levin said, but because the sample size of planets with known life is just one, it's hard to know what is unique to Earth and what would hold true in space. For example, eyes or eye-like structures have evolved independently about 40 times on Earth, but it's not clear if aliens would also have eyes or whether sight is an Earth-centric sense.

"Theoretical predictions, like the ones we make, are not tied to the details of Earth," Levin said. "They hold regardless of whether aliens are made of carbon or silicon, have DNA or 'XNA,' breathe oxygen or nitrogen, etc."

Theoretical predictions cannot determine anything as specific as whether aliens would look more like E.T. or the Predator, but natural selection does lead to certain kinds of organisms. Aliens that have undergone natural selection would be "nested," Levin said — they would have undergone transformations in complexity over time, and they'd retain some evidence of those transitions. On Earth, genes "cooperated" to make genomes, genomes made blueprints for cells, and primitive cells eventually joined together to make more complex eukaryotic cells. (Mitochondria, the energy-transforming organelles of eukaryotic cells, were once separate organisms that entered a mutually beneficial relationship with their host cells.) Cells join together to make multicellular organisms, and multicellular organisms often cooperate in colonies or societies.

Getting to know the neighbors

To illustrate the concept, Levin and his colleagues dreamed up a tuber-like alien they called the "Octomite," a complex creature made up of smaller entities that have aligned their interests so that they cooperate, much like the human body's cells work together to keep a person alive.

"Are we alone?" is one of the fundamental questions of the universe, Levin said, so it's worth pondering the sort of life we might run across if we do find E.T. out there.

"On a more philosophical level, understanding what features will be universal to life, wherever it exists, seems deeply rewarding," Levin said. "Our work can't answer the question of whether we're alone, but it does tell us something about our neighbors if we're not alone."