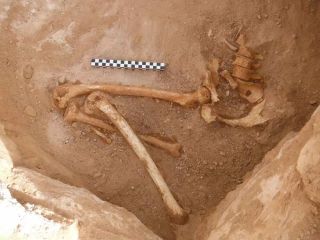 Remains of the pregnant woman's fetus bones in her pelvis can be seen in this photo. She was in her first trimester when she died.
(Image: © Photo courtesy Central Timna Valley Project )

The skeleton of a pregnant woman, dating back around 3,200 years, has been found near a temple dedicated to the Egyptian goddess Hathor at a place that was once called King Solomon's Mines, archaeologists recently announced.

Located in the Timna Valley in Israel, ancient Egyptians and others in the region used the mines for copper mining. Early archaeologists and explorers believed that King Solomon, an ancient Israeli ruler, controlled the Timna mines. However, many scholars now think the claim is unlikely.

Archaeologists discovered the pregnant woman's skeleton buried in a tumulus (a tomb covered by rocks) near Hathor's temple. The people worshipped Hathor — the goddess of love, pleasure and maternity — at Timna, and considered her to be the protector of the miners. [See Photos of the Burial and Skeletal Remains in Timna Valley]

At the time the pregnant woman lived, Egypt controlled the mines at Timna, suggesting she was Egyptian. In addition, she may have been a singer at the  Hathor temple, said Erez Ben-Yosef, the director of the Central Timna Valley Projectand a senior lecturer in archaeology at Tel Aviv University. She was buried with beads whose design is similar to those found at the Hathor temple, Ben-Yosef told Live Science.

An examination of her remains indicates she was in her early 20s and in the first trimester of her pregnancy when she died. The cause of her death is unknown.

The woman likely accompanied one of the mining expeditions sent to the Timna Valley to extract copper; she would have served in the Hathor temple while mining operations were underway. The rituals and ceremonies performed at the temple were important, since Hathor was thought to protect the miners.

It's not known whether the woman traveled to Timna from Egypt while she was pregnant or whether she was impregnated while serving at the Hathor temple, Ben-Yosef said. "Probably she wouldn't have traveled if she knew she was pregnant, but this is only a guess.

Egypt's power in the Timna area weakened in the century after the woman died, and Egypt eventually lost control of the mines to other groups in the region.

Other findings in Timna Valley include preserved leftovers from a mining camp called Slaves' Hill. Those leftovers suggested the metalworkers ate meals of sheep and goat, as well as pistachios, grapes and fish during the 10th century B.C. More recently at Slaves' Hill, scientists revealed the remains of a sophisticated gatehouse and donkey stables that suggested the settlement had a highly organized defense system. In another discovery, archaeologists reported in 2013 that they had dug up artifacts in the valley that dated to the time of the biblical King Solomon.

Other research is underway to get a better understanding of the history of Timna.