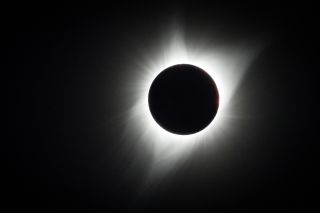 The Old Testament Book of Joshua may contain the oldest known reference to a solar eclipse recorded by humanity. And it occurred 3,224 years ago today (Oct. 30).

If so, this poetic reference firms up the dates of the reign of the Egyptian pharaoh Ramesses the Great (also called Ramesses II), according to a new paper published in the journal Astronomy & Geophysics.

The text in question is in the 12th and 13th verses of the 10th chapter of the Book of Joshua. According to the King James version of the Bible, these verses read, "Then spake Joshua to the Lord in the day when the Lord delivered up the Amorites before the children of Israel, and he said in the sight of Israel, Sun, stand thou still upon Gibeon, and thou, Moon, in the valley of Ajalon. And the sun stood still, and the moon stayed, until the people had avenged themselves upon their enemies. … So, the sun stood still in the midst of heaven, and hasted not to go down about a whole day." [See Photos of the Mummy of Another Egyptian Pharaoh - Ramesses III]

The passage is part of the story of Joshua leading the Israelites into Canaan (today's Israel and Palestine) and beating back their enemies (the Amorites) after the Amorite armies laid siege to the Israelite camp. Astronomically speaking, the text may refer to a solar eclipse (when the moon blocks the sun's light from reaching portions of the Earth), said Sir Colin Humphreys, a materials science professor at the University of Cambridge in England.

The King James translation of the Bible refers to the sun and moon standing still, Humphreys said, but the original Hebrew uses a root word that, in Babylonian, a related tongue, can also describe eclipses. What Joshua may have prayed, in other words, was not that the moon and sun would freeze in the sky, but that they would stop their usual shining.

Previous researchers have attempted to validate this eclipse hypothesis by linking the Book of Joshua to an independent indicator of when the Israelites were in Canaan: a stele from the reign of the Egyptian pharaoh Merneptah, son of Ramesses the Great. The Merneptah stele, carved in the fifth year of Merneptah's reign, mentions that the pharaoh ordered a (successful) campaign against the people of Israel in Canaan. Dating the stele puts the Israelites in Canaan between 1500 B.C. and 1050 B.C.

But until now, scientists haven't had much luck cross-referencing the two dates. Astronomical calculations turned up no total solar eclipses that matched. Humphreys and his colleagues expanded the search to include not only total eclipses, but also annular eclipses. In these celestial events, the moon slips between the Earth and the sun but not at a distance at which it appears to cover the sun's face entirely. The result is an impressive display that looks like a ring of fire in the sky, but without the sudden twilight darkness of a total solar eclipse.

Humphreys and his colleagues use astronomical calculations to determine that the only annular eclipse visible from Canaan between 1500 B.C. and 1050 B.C. was on the afternoon of Oct. 30, 1207 B.C. The details in the stele further suggest, then, that Merneptah's reign began in 1210 B.C. or 1209 B.C., the researchers reported today. That pegs Ramesses the Great's reign from 1276 B.C. to about 1210 B.C. Previous estimates put his death at around 1213 B.C. Ramesses is famous for his military campaigns in Canaan and Nubia and for leaving behind magnificent statues of himself in temples and monuments.

"The precise dates of the pharaohs have been subject to some uncertainty among Egyptologists," Humphreys said in a statement, "but this new calculation, if accepted, could lead to an adjustment in the dates of several of their reigns and enable us to date them precisely."

Editor's Note: This article was updated to correct how long ago the eclipse occurred.