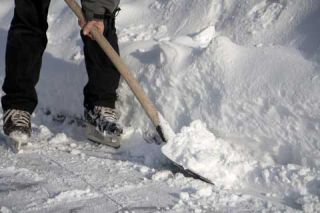 As mid-Atlantic residents dig themselves out from the snow, literally, doctors say they should listen to their bodies and not overdo it.

"If you're not a regular exerciser or you're in poor physical shape, your body won't be prepared for the stress of shoveling snow and you increase your chances of sustaining muscle pulls, back injuries, and strains," said Dr. Susan Wainwright, vice chair of the Department of Physical Therapy at the University of the Sciences in Philadelphia. "Snow shoveling can also strain the heart and cause potentially life threatening injuries, such as a heart attack."

In 2007, more than 118,000 individuals were treated in hospital emergency rooms, doctors' offices and other medical offices for injuries related to snow shoveling or manual removal of ice, according to the U.S. Consumer Products Safety Commission. More than 16,000 were injured using snow blowers. Injuries ranged from sprains of the back and shoulders to lacerations and even finger amputations.

If you're wishing that snow could magically melt at once, here's what that pipe dream would look like: The density of new snow ranges from about 5 percent when the air temperature is 14 degrees Fahrenheit (minus 10 degrees Celsius) to about 20 percent when the temperature is 32 degrees F (0 degrees C). So if you have, say, 20 inches (50 cm) of snow at just-freezing temperatures, the water equivalent would be 4 inches (10 cm).

"The heart is a muscle just like any other muscle in your body and when it gets strained, it shuts down because it can't handle the increased load," Wainwright said. "Older adults who aren't active tax their cardiovascular system when they start to shovel and this often results in heart attacks."

For those who are fit enough to shovel, the wintry obligation can be a form of exercise. A 145-pound person burns almost 400 calories an hour shoveling snow, according to the AARP.