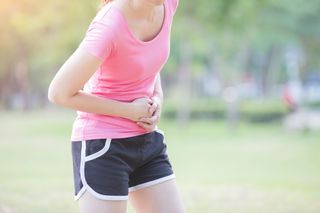 If you're a long-distance runner, it may be an all-too-familiar scenario: You're partway through your run when your stomach cramps and you need to find a bathroom — immediately. A small new study from Australia suggests that making some changes to your diet could help ease your tummy troubles when working out.

In the study, researchers found that eating a diet low in foods containing "FODMAPs" led to less gastrointestinal distress in endurance athletes compared with a high-FODMAP diet, according to the study, published online in September in the journal Medicine & Science in Sports & Exercise.

FODMAPs (short for fermentable oligosaccharide, disaccharide, monosaccharide and polyols) are a group of short-chain carbohydrates found in a variety of foods, including wheat, onions, milk, apples and cauliflower. [Get Gutsy About Your Digestive Health in 2017]

These carbohydrates aren't well-digested in the upper part of the gut, so when they arrive in the large intestine, they are fermented by gut bacteria, producing gas, said Dana Lis, a health sciences researcher at the University of Tasmania in Australia. FODMAPs can cause symptoms in people with irritable bowel syndrome (IBS), but are "rarely an issue" for those without IBS, Lis said.

But earlier work by Lis led her to suspect that FODMAPs could be a culprit of gastrointestinal distress in otherwise-healthy endurance athletes. For example, Lis and her team found that a gluten-free diet reduced stomach issues in athletes, but it didn't seem like the gluten itself was responsible for the effects. Instead, the gluten-free diet also cut out a lot of FODMAPs, Lis told Live Science.

In addition, most athletes say that they avoid at least one food high in FODMAPs to reduce GI symptoms, even if they don't realize the food is high in the compounds, Lis said.

To test the hypothesis, 11 recreational competitive runners with self-reported exercise-related GI symptoms — such as bloating and diarrhea — ate either a high-FODMAP diet or a low-FODMAP diet for six days. During that time, they followed a prescribed training routine. After the six days, the people in the study took one day off, and then repeated the procedure with the other diet.

Changes in the body during exercise are the main reason that endurance athletes experience GI symptoms, Lis said. For example, during exercise, less blood flows to the gut, which can affect digestion.

But it's possible that FODMAPs make these symptoms worse: Even healthy people don't digest FODMAPs well, and when gut function is already affected by exercise, digesting the short-chain carbohydrates becomes even more difficult, Lis said.

In addition, many endurance athletes tend to eat high-FODMAP diets, including lots of fruits, vegetables and sports-related food products, Lis said. Though this can be good for gut health overall, some athletes may benefit from cutting back on FODMAPs around key training sessions, she said. [Fitness Nutrition: What Science Says About Diet and Exercise]

The new study was very small, and more research is needed to confirm the findings. However, Lis said that "for athletes who are at their wits' end trying to deal with exercise-associated GI distress, this could be a novel tool for possible symptom reduction," particularly around specific endurance events. "A full low-FODMAP diet for an extended period is rarely advised and could lead to unnecessary diet restriction," she added.