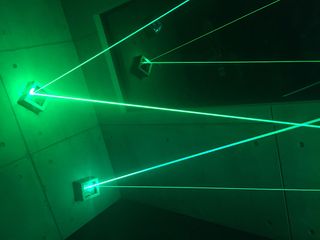 In "Echo Escape," presented by Amazon, a group of players work together against a ticking clock, piecing together clues that will open the doors and release them from a series of locked rooms. But there's an unexpected twist to this unusual challenge.

Like other escape rooms, this entertainment experience places participants in seemingly locked spaces, where they must solve puzzles that guide them to freedom. But this is the first such experience to incorporate voice-activated technology, Amazon representatives told Live Science. "Echo Escape" harnesses Amazon's Echo devices and the company's Alexa virtual assistant to help players find what they need in order to outwit enemy agents and escape each room before time runs out. [11 Odd and Intriguing Smart Home Technologies]

"We wanted to show people the fun experiences that you can have using your voice — and an escape room seemed like a really unique way to do that," Amazon spokesperson Dawn Brun told Live Science at New York Comic Con (NYCC).

In homes, Echo devices and Alexa can perform a number of "smart" tasks, allowing users to remotely control lights, temperature settings and individual appliances via voice commands. Alexa can also search for information on the internet, play music, and perform tasks such as setting alarms and notifications and updating calendars. Amazon designed "Echo Escape" to incorporate ways that people can interact with Alexa, weaving those functions into a narrative that mirrors the world of the new Amazon original series "Tom Clancy's Jack Ryan," coming out in 2018.

The series' title character, a CIA agent played by actor John Krasinski, was created by author Tom Clancy and was introduced in the 1984 political thriller "The Hunt for Red October." Ryan has since appeared in five films, played by Alec Baldwin, Harrison Ford, Ben Affleck and Chris Pine.

In "Echo Escape," players use the Echo device to interact with voice recordings from Ryan and with video calls from another agent, known only as "Foxtrot." Two types of Echo smart-home tech appear throughout the NYCC escape room: Echo Show, which includes a touch screen, and Echo Plus, a new device that incorporates a hub to connect multiple appliances. It's commercially available on Oct. 31.

The mission, which takes about 20 minutes to complete, begins when a team of up to six players fitted with wireless microphones enters a small room resembling a metal vault. To open the locked door, and the doors of subsequent rooms, participants follow instructions from Ryan and interact with Foxtrot to find the objects that will advance them to the next level. The group can also request help along the way from Alexa, for instance, by remotely controlling the room's lighting or other elements.

"An escape room lends itself really well to 'Jack Ryan,'" Brun told Live Science. "And [a voice-enabled escape room] hasn't been done before, so we thought it would be a fun experiment to try."

"Echo Escape" is at the Jacob K. Javits Convention Center during New York Comic Con (Oct. 5 to Oct. 8) and is open to all badge-holders.