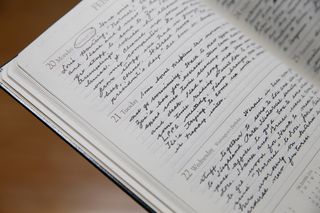 Keeping a journal can help people suffering from some types of memory loss to forge stronger connections to events in their past.
(Image: © Jose M. Osorio/Chicago Tribune/TNS/Getty)

Amnesia — the loss of memories, or the inability to form new ones — is typically triggered by damage to structures in the memory-forming part of the brain, called the limbic system. And it's usually associated with causes such as a severe blow to the head, oxygen deprivation, drug or alcohol abuse, or degenerative brain disease.

However, there is another rare type of memory loss, called psychogenic amnesia, that appears independent of a brain disorder or injury and is linked to psychological factors. Far less is known about it than is known about neurological amnesia.

But a new study of psychogenic amnesia, also known as "dissociative amnesia" or "functional amnesia," could change that. In the study — one of the largest and most comprehensive to date of this unusual condition — researchers described this type of memory loss more clearly than ever before, and found that people who suffered from it were more likely to recover than once thought. [10 Things You Didn't Know About the Brain]

Prior studies noted that certain conditions could predispose a person to develop functional amnesia: severe stress or crisis, a history of depression or suicidal tendencies, or a history of neurological amnesia.

However, the authors of the new study pointed out that most of the existing research describing functional amnesia consisted of individual case studies.

Functional amnesia is uncommon, affecting about 1 percent of men and nearly 3 percent of women, according to the Cleveland Clinic in Ohio. Because it is so rare, there were no large studies that compared cases, and there was little published data about shared characteristics between cases that could help experts assess and manage this type of memory loss, study co-author Michael Kopelman, a professor with the Institute of Psychiatry, Psychology, and Neuroscience at King's College London, told Live Science in an email.

For their new investigation, the scientists looked at 53 patients, ages 21 to 66, who were seen at St Thomas' Hospital in London between 1990 and 2008, and who were diagnosed with psychogenic amnesia. The researchers also included 21 people with neurological memory disorders and 14 people who had no history of memory trouble.

After analyzing the people suffering from functional amnesia, the researchers created the first-ever groupings for this condition, defining four diagnostic states describing different aspects of short-term and long-term loss of autobiographical information or sense of personal identity.

Within the four groupings, patients in two of the groups were more likely to not know who they were, while patients in the two other groups more commonly failed to recognize members of their families, the researchers found. Compared with people who suffered from neurological amnesia, individuals with functional amnesia (across all four groups) were more likely to have experienced depression, post-traumatic stress disorder, or problems with drugs or alcohol, or to have struggled with employment issues or family conflicts, the study authors wrote.

Experiencing a mild head injury in the past — one not severe enough to be the cause of memory loss — was also more common among people with functional amnesia, a finding that surprised the researchers, they reported in the study.

Their findings revealed indicators that could help health practitioners more readily distinguish functional amnesia from neurological amnesia, enabling earlier and more targeted treatment for underlying causes such as depression, Kopelman told Live Science. With early treatment, the prognosis for this type of amnesia is "better than the previous literature suggests," the study authors concluded.

The findings were published online Aug. 24 in Brain: A Journal of Neurology.