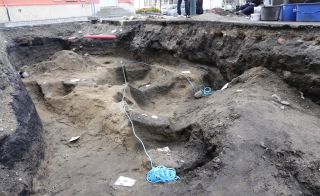 Archaeologists discovered the possible remains of a person buried in a boat in a market square in Trondheim, Norway.
(Image: © Norwegian Institute for Cultural Heritage Research (NIKU))

Archaeologists excavating a market square in Trondheim, Norway, have discovered the remains of a boat grave and possible human remains dating to around the time the Vikings started exploring and raiding lands across Europe.

Though the wood from the boat wasn't intact, the archaeologists found nails and lumps of rust that allowed them to confirm that the buried object was, in fact, a boat, NIKU archaeologist Ian Reed said in a statement.

They also found two long bones in the boat. Since the bones were not well preserved, the scientists will run DNA tests to confirm that the remains are human. If they are, the tests may reveal more information about the person who was buried there. [Fierce Fighters: 7 Secrets of Viking Seamen]

A piece of bronze and what might be the remains of burial goods were found beside one of the bones. A piece of a spoon and part of a key that would have opened a chest were also discovered, archaeologists say.

The boat likely dates to sometime between the seventh and 10th centuries, around the time the Vikings started exploring the North Atlantic and Europe, at times sending raiding and colonizing parties ashore.  Why the Vikings began exploring and raiding on a large scale is a source of debate, with one theory suggesting a shortage of young women For marriage as the impetus.

During this time, the Vikings also explored and colonized Iceland and Greenland, and founded a short-lived settlement in Newfoundland. They also explored the Canadian Arctic, Labrador and a mysterious location in North America called "Vinland," where grapes supposedly grew.

The municipality of Trondheim and the Norwegian Directorate for Cultural Heritage financed the archaeological investigations that revealed the boat burial.