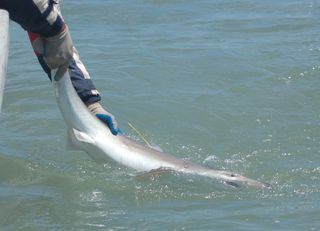 A tope shark tagged by Juan Martín Cuevas is ready to be released after recovery in the water in Bahía San Blás MPA.
(Image: © Gustavo Chiaramonte)

Juan Martín Cuevas is a marine conservationist with the Argentina program at WCS (Wildlife Conservation Society). Since late 2015, he has been working to develop and implement a conservation plan for sharks and rays in the Patagonian Sea. Cuevas contributed this article to Live Science's Expert Voices: Op-Ed & Insights.

In the waters found off the southern part of the Buenos Aires province in Northern Patagonia may be one of the most popular shark-fishing spots in Argentina and possibly in all of South America.

Called Bahía San Blas, this spot is a baby-delivery room of sorts, serving as a major nursery for several shark species, including the tope shark (Galeorhinus galeus), or cazón.

And while this 888-square-mile (2,300 square kilometers) stretch of sea is considered a marine-protected area, its remoteness leads to weak law enforcement and a significant loss of sharks to recreational fishing. This lack of true protection is particularly harmful to the topes — the focus of my conservation work.

Topes are medium in size and easy to handle, with a long, pointed and transparent snout. During the spring and summer, fishers gather these sharks by the thousands. Even so, few know that the species is endangered.

Due to their low reproduction rate — females give birth to about 20 pups every three years — it is illegal to kill tope sharks in Buenos Aires province waters. They have also been classified as Critically Endangered in the Southwest Atlantic since 2006 as Brazil and Uruguay saw an extreme population decline and the Argentine trawler fleet reduced its catch per unit effort (CPUE) by 80 percent after a peak of 610,000 individuals landed in 1984 for all commercial fleets. [On the Brink: A Gallery of Wild Sharks]

My goal has been to engage fishing guides in a tagging program called Conservar Tiburones en Argentina(Conserving Sharks in Argentina) that involves most of the coast of  thePatagonian Sea — a body of water teeming with threatened and endangered sharks, rays, skates and chimaeras (also called ghost sharks, even though they aren't actual "sharks").

During the project, I helped to recruit 83 anglers, 25 fishing guides and participants in three shark tournaments to shift from catch-and-retain practices to catch, tag, and release (I am happy to report that many of of these folks remain involved in this work).

The program began as an initiative of the Conservation Leadership Programme (CLP), created by a partnership between Birdlife International, Fauna & Flora International, and WCS to obtain data on threatened species. Since 2013, the project has tagged more than 450 sharks in the targeted coastal shark fishing sites.

Shark conservation in the Patagonian Sea includes everything from preparing management plans to estimating population sizes of target species.

In 2016, I initiated just such a population study. We captured tope sharks in the San Blas protected areausing longline gear with barbless circular hooks baited with Brazilian menhaden, a forage fish. We measured each shark's length, determined their sex and attached dart tags to their dorsal fins. Three monitoring stations were established to repeat the tagging procedure during the springtime of the next three years to complete a tope count inside the marine-protected area. [In Photos: Patagonia's New Marine Parks]

I am also engaged in projects to identify priority habitats, increase shark awareness in local communities, and to engage key stakeholders as stewards in the design and implementation of a Tope Conservation Program.

While we have been working with recreational fishermen, commercial fisheries are also essential to this conservation. According to the United Nations Food and Agriculture Organization (FAO), Argentina's catches of cartilaginous, or chondrichthyan, fishes (as opposed to bony fishes) are among the highest in the world. While the sharks, rays and skates that make up the majority of this fish class are not traditional targets, many species are hauled in incidentally in nets as bycatch or harmed unnecessarily during industrial and small-scale fishing activities.

There are 30 species of sharks and skates in the Patagonian Sea that are rated as "Threatened" on the Red List kept by the International Union for Conservation of Nature (IUCN). For instance, the regional school shark (Galeorhinus galeus) is Critically Endangered and the Argentine fishery for this commercially targeted species has collapsed.

Despite strong evidence of shark species declines, management actions have been slow to implement. In 2013, the Federal Fisheries Council passed a resolution to reduce the mortality of chondrichthyans, making the practice of finning (the removal of shark fins for use in a popular Asian soup delicacy) illegal, requiring fishers to report incidental catches, and placing observers onboard boats to report any significant levels of incidental catches.

While such measures were necessary and overdue, they have not eliminated overfishing, nor have they ensured the future of these species. In Argentina and the Patagonian Sea, comprehensive research and sustained engagement and advocacy remain essential to improve the conservation of sharks, rays and their chondrichthyan cousins before we lose them for good.