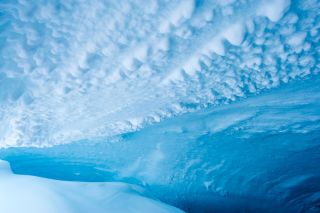 This photo from December 2014 shows the frozen ceiling and icy walls of a cave on Mount Erebus in Antarctica.
(Image: © National Geographic Creative/Alamy)

Although the temperatures in caves on the world's southernmost active volcano are closer to those of a summer night than those of a sauna, new research suggests that even this moderate heat may make life possible there.

A team of researchers slid and rappelled into frosty caves on Mount Erebus in Antarctica to search for evidence of organisms lurking in the soil. By analyzing the soil samples, they discovered DNA from a variety of organisms, including fungi, mosses, algae and animals such as roundworms, a new study reveals.

"You have to remember that what we found was the genetic signature of these organisms. We haven't found them crawling around in there," study co-author Craig Cary, a professor of environmental biotechnology at the University of Waikato in New Zealand, told Live Science. [Images: See an Antarctic Glacier Calve an Iceberg]

In fact, it's possible that the organisms never actually lived in the caves, study co-author Laurie Connell, a research professor of microbial ecology at the University of Maine, told Live Science. Perhaps, the organisms blew into the caves, she said.

But these findings do suggest that even at the ends of the Earth, such hostile environments may be pocked with habitable niches.

"It's just another sort of confirmation that the places you're most likely to find more complex organisms is where you have some sort of energy source — in this case, a heat source from the volcanic activity," Scott Rogers, a professor of molecular biology at Bowling Green State University who was not involved in the new study, told Live Science.

In 2013, beneath more than 2 miles (3.2 kilometers) of ice, Rogers and his team found the majority of the DNA and RNA (a genetic molecule that plays a role in translating the body's proteins) from thousands of species of organisms in ice from the Antarctic Lake Vostok close to what the team believes to be hydrothermal activity, according to a study in the journal Biology.

For Cary, his work in extending the known reach of traces of life into Antarctic caves on a volcano has been an otherworldly experience.

"Working in these geothermal sites reminds me of the soil on the moon, when Armstrong stepped and left that impression. Your feet leave impressions like that. The only thing is, they don't last very long because the heat coming up through the soil has a tendency to reinflate the soil and so, year after year, when we go back, we don't tend to see our footsteps," Cary told Live Science.

Cary also wants to know more about what other traces of life might remain in Mount Erebus caves.

"Now we want to get down and do some subsurface stuff — actually getting down into the soil — because that's where I think some of the real exciting bacteria are hiding," said Cary.

The new study was published online Aug. 17 in the journal Polar Biology.