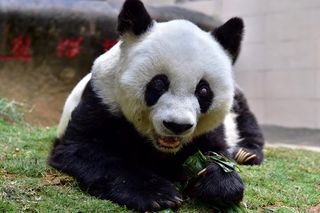 Basi the panda, photographed on Jan. 2017 at the Strait Panda Research and Exchange Center, died yesterday (Sept. 13) at the age of 37.
(Image: © Wei Peiquan/Xinhua/Zuma)

The oldest giant panda in captivity died yesterday (Sept. 13) at the advanced age of 37, according to the state-run Chinese news outlet Xinhua News Agency.

The panda, named Basi, died of multiple causes, including cirrhosis of the liver and kidney failure, the animal's keepers said.

"Basi has left, but her beautiful image and Basi spirit will forever be in our hearts," said Chen Yucun, director of the Straits Giant Panda Research and Exchange Center in Fuzhou, China, which housed Basi, according to Agence France-Presse. (In Fujian province, where Fuzhou is the capital, "basi" has come to mean "beautiful," according to Pandas International, a Colorado-based nonprofit organization.) [Cute Alert! Adorable Photos of Giant Panda Triplets]

Born in the wild, Basi is first known to have made human contact in 1984, when she was rescued by Li Xingyu, a farmer, who spotted the unconscious panda floating in a freezing river in Sichuan province, the China Daily reported. Experts determined that the panda was likely 4 years old at the time, according to the Daily Mail.

After making her way into the care of Chen in Fuzhou in 1990, Basi was trained to lift weights, ride a bike and twirl a baton, according to The Telegraph.

The panda is thought to have been the inspiration for the mascot of the 1990 Asian Games, and over the years, Basi has charmed many. But one of the deepest impressions she made during her long life may have been on the farmer who rescued her.

"I have four children, but Basi is my fifth child, my little daughter," Li told China Daily, when celebrating Basi's 25th birthday in 2005.

In recent years, Basi's health had begun to fail. In 2016, Basi was reported to have been blind, and to have high blood pressure and arthritis, according to Pandas International. Early this year, however, Chen told Xinhua News that Basi was generally in good health.

The average life span for pandas in the wild is 14 to 20 years, while in captivity, the animals can live to be up to 30 years old, according to the World Wildlife Fund. The oldest panda in captivity of all time — that is known to the Guinness World Records — was a female giant panda named Jia Jia, who died in October 2016 at age 38.