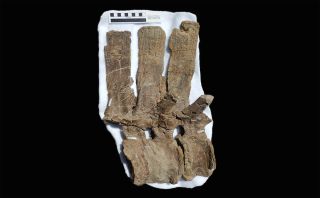 The duck-billed dinosaur's vertebrae were fused together because of its joint condition.
(Image: © Courtesy Royal Tyrrell Museum)

There weren't any doctors when dinosaurs roamed the Earth, but one duck-billed dino has managed to get a diagnosis for its unusual joint condition about 78 million years after its death, thanks to a group of researchers who analyzed its strangely fused and pitted fossilized bones.

The adult duck-billed dinosaur, known as a hadrosaurid, had an inflammatory type of chronic arthritis, known as spondyloarthropathy, that attacks the spine and can cause the vertebrae to fuse together.

"This is the first occurrence of spondyloarthropathy in a hadrosaurid that we know [of]," said Darren Tanke, a senior fossil preparation technician at the Royal Tyrrell Museum of Palaeontology in Alberta, Canada, who is studying the fossils. [Photos: Duck-Billed Dinos Found in Alaska]

Researchers uncovered the unique fossils in 1988 from a bone bed — basically, an accumulation of bones from different dinosaurs in one location — at Milk River Ridge Reservoir, an artificial lake in southern Alberta.

"We were just doing a general collection of the bones along the shoreline there," Tanke told Live Science. "The lake was lapping against the shoreline, exposing all these bones. They had to be collected right away, or they would have been destroyed."

The scientists put the fossils into a plaster jacket, and worked on them over the years at the Royal Tyrell Museum, extracting horned and duck-billed dinosaur remains from the rock. Recently, a probe into the sample revealed a mysterious bone; it looked like the dinosaur's sacrum — a bone in the lower back made of fused vertebrae that sits between the hip bones and the pelvis.

But this guess was wildly wrong, the researchers soon found.

"As [the fossil] became more and more cleaned up, we realized that the fusion of the vertebrae wasn't the sacrum," Tanke said. "It was fused because it was a pathology of the specimen, and the bones were not sacral vertebrae; they were dorsal vertebrae [in the middle of the back]."

It's not uncommon to find fused duck-billed-dinosaur vertebrae, but these vertebrae are typically in the dinosaur's tail, not in the middle of its spine, Tanke said.

Tanke excavated the rest of the duck-billed-dino specimen with extreme care, using an instrument that blasted air and an abrasive (in this case, baking soda) at the fossils to free them from the rock and clay.

The end result was unexpected: They found fused, pitted and textured vertebrae — a sign of spondyloarthropathy, said study co-researcher Dr. Bruce Rothschild, a professor in the School of Medicine at West Virginia University.

The condition likely impaired the dinosaur's movement — a disadvantage if it was fleeing a predator, such as a tyrannosaur, Rothschild said. The ailment may have also made it difficult for the duck-billed creature to move around in everyday life and defend itself, he said.

Evidence of spondyloarthropathy has also been found in other dinosaurs, including two species of horned dinosaur, six types of sauropod (a long-necked and long-tailed herbivorous giants) and two species of theropod (bipedal, mostly meat-eating dinosaurs, such as tyrannosaurs), the researchers said. The condition also affects mammals, including humans, Rothschild said. [The Strangest Medical Conditions]

There is no cure for the condition, but its symptoms in humans are often treated with the anti-inflammatory drug sulfasalazine (brand names Azulfidine and Sulfazine), Rothschild noted.

The research, which has yet to be published in a peer-reviewed journal, was presented Aug. 23 at the 2017 Society of Vertebrate Paleontology meeting in Calgary, Alberta.