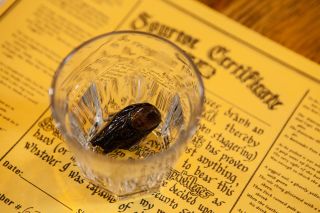 A preserved toe is famously served as a key ingredient in a by-request cocktail at a Canadian hotel saloon.
(Image: © PR Services)

The notorious "Sourtoe Cocktail" — a shot of alcohol containing a dehydrated human toe — is a bizarre tradition at the Downtown Hotel's Sourdough Saloon, in Dawson City, Yukon Territory. The cocktail craze kicked off in 1973, after riverboat Capt. Dick Stevenson found a preserved toe in an abandoned Yukon cabin; the toe was thought to belong to a 1920s-era bootlegger named Louie Linken, the Sourtoe Cocktail Club website says.

According to local legend, Linken's brother amputated the toe with an ax — the digit had frozen while the pair were on the lam from the law — and preserved it in alcohol while they were hiding out in the cabin. Stevenson established an exclusive drinking club at the Sourdough Saloon based around the toe, with one qualification for admission: Would-be members had to quaff a drink with the toe in it.

Once an intrepid patron has committed to tossing back a drink garnished with a preserved toe, the alcohol choice almost seems irrelevant. Obligingly, the bar serves up the Sourtoe Cocktail with your tipple of choice, but many opt to drink their toe doused in a shot of Yukon Jack — an 80-proof liquor made from Canadian whisky and honey, according to the Sourdough Saloon website. A saloon-designated "toe captain" drops a mummified human toe in the brimming shot glass, and the Sourtoe Cocktail is ready. But the drinker must follow a key Sourdough Saloon rule: "You can drink it fast, you can drink it slow, but your lips must touch the toe." [The 10 Weirdest Ways We Deal with the Dead]

Whether the original toe truly belonged to a notorious Prohibition-era rumrunner is anyone's guess. Nonetheless, the original toe was retired long ago — but the bar has always managed to find replacement toes, the Canadian Broadcasting Corp. (CBC) reported in 2013.

To date, 71,468 people have downed the drink and tasted the toe, toe captain Terry Lee recently told NPR. Lee maintains the mummified toe at the bar, where it is kept stored in salt that he changes once a week, NPR reported.

Currently, the toe is ceremoniously offered to prospective customers between the hours of 9 p.m. and 11 p.m. local time, a Downtown Hotel representative told Live Science. After downing the shot, the drinker receives an official certificate from toe captain Lee. A photo of the document shared on Instagram on June 13 by user @culinarystudio stated that the drinker had proved "to be a person capable of almost anything," as witnessed by "Capt. River Rat."

The certificate is generally enough of a souvenir for most of the cocktail's imbibers. But some Sourtoe sippers want a more substantial memento and thus take matters — and the toe — into their own hands.

In 2013, a patron deliberately swallowed the toe — the first such incident in the cocktail's history — paying the bar's fine of $500 and prompting the staff to raise the toe-swallowing penalty to $2,500, the CBC reported.

Unfortunately, that deprived the bar of its last big toe, leaving only "what we call the secondary toes next to the big toe," Lee told NPR.

More recently, on June 17, the saloon again found itself one toe short, after a late-night customer ran off with the grisly severed digit, the Toronto Sun reported. Luckily, the bar had "other toes to tide us over," a Downtown Hotel representative said in a Facebook post. But that didn't stop them from putting out a call on social media for "toenations," offering a free Yukon vacation to one lucky winner willing to post a photo of their toes under #MakeAToenation, for consideration as a replacement, according to the contest website.

Meanwhile, the Yukon Royal Canadian Mounted Police (RCMP) were hot on the alleged suspect's trail. The toe-napper called the RCMP on June 20 to say that he had mailed the toe back to the hotel, RCMP representatives said in a statement. On June 22, the toe arrived at the bar, along with a handwritten apology that read, "I'm deeply sorry. I was way to [sic] drunk and lost my mind celebrating a special Yukon date," and was signed "Sincerely, A Drunken Fool," the Yukon News reported.

"At the time that the package was opened, the toe was believed to be in good condition," according to the RCMP. [Photos of the Best Preserved Bog People]

In the spirit of "toenation," the contest for a replacement toe went ahead anyway, and on July 10, Travel Yukon chose one winner from over 300 entries that made the cut, with a representative writing on Instagram, "Your toe now belongs to us. Dust that thing off and get it ready to be marinated in our famous Sourtoe Cocktail."

The winner, Kelly Green — a kayak instructor from British Columbia — will receive a weeklong vacation across the Yukon, during which she'll visit the Sourdough Saloon to sign a contract making her "toenation" official, the Vancouver Sun reported.

And the trip won't cost her an arm and a leg — just her big toe, which she will donate posthumously at some undisclosed point in the future, Green told the Vancouver Sun.

"I won't need it anymore, and my grandkids are going to be able to tell a really good story," Green said.