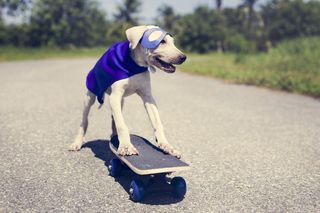 Evolution has been occurring for billions of years, producing organisms that are perfectly adapted to their environments. And this includes abilities that we would normally consider superpowers if humans were to have them. But these powers really do exist in the animal kingdom.

In the superhero world, Matt Murdock, who was blinded by radioactive waste as a child, developed a superhuman ability to sense using sound waves and became the superhero Daredevil. This gives Daredevil a 360-degree field of "vision," allowing him to precisely locate objects or people in all directions, an obvious advantage over normal vision.

Bats, despite being nocturnal animals, cannot see in the dark. Instead they have evolved a similar ability known as use echolocation to navigate and locate prey at night. The bat emits a very high frequency sound and listens for the echo that bounces off objects. The difference in time between emitting the sound and hearing the echo allows the bat to build up a mental "picture" of its environment. Sounds that take longer to bounce back indicate that the surroundings are further away.

Matt Murdock's ability may not be too far from reality as humans can also learn to use echolocation. By making clicking noises or stomping their feet some visually impaired people are able to accurately "visualise" their surroundings.

The X-Men's arch-villian Magneto can sense and manipulate magnetic fields with his mind. And some animals have a similar magnetic sense known as "magnetoreception" that they use to navigate and orient themselves. For example, homing pigeons are able to navigate back to their home lofts when visual cues are missing but can't do so when magnets are nearby. This suggests that they may use the Earth's magnetic field to navigate.

Although we don't understand exactly how they do this, pigeons have been found to possess a substance called magnetite in their beaks, which becomes magnetised when exposed to magnetic fields. So they may be following their nose, so to speak.

Of course, Magneto's magnetic powers can produce a much wider range of effects, from lifting and manipulating metal objects to rearranging matter (a power definitely not seen in animals). However, his daughter Polaris has the ability to perceive the world as patterns of magnetic energy, which actually isn't too dissimilar to the powers present in the animal kingdom.

The ability to shapeshift and mimic the form of others is a formidable power for a superhero or villain – and has been used by X–Men's Mystique on many occasions to lure and manipulate her foes. A rare few animals are capable of changing their shape and size in the real world, most notably the mimic octopus.

It can alter its colour, behaviour, shape and texture to mimic a diverse range of species, with at least 13 examples recorded so far including sea snakes, jellyfish and sea anemones. Most of the impersonated species are poisonous, and so pretending to be them helps the octopus ward off predators. But this shapeshifter is also able to imitate its prey, possibly in an attempt to lure them in closer before feasting on them.

The ability to steal the superpowers of another individual is surely the ultimate power, enabling you to have any power in existence. X–Men's Rogue has the incredible ability to absorb superpowers of anyone she touches – but so do the Pitohui birds of New Guinea (well, almost). The feathers and skin of Pitohui contain a noxious substance, making them possibly the only poisonous birds in the world and giving them defence against predators. But the birds don't appear to be able to produce the toxic substance directly. Instead, they acquire it by eating Choresine beetles.

Furthermore, scientists think this toxicity might even rub off onto the birds' eggs and young, making them toxic to predators as well, even though they have never eaten the Choresine beetles. So the infant birds are essentially absorbing the superpower from their parents in the same way that Rogue absorbs powers when she touches other people.

One animal ability even goes beyond what has been imagined by superhero fiction. Bombardier beetles are noted for their unique defence mechanism that enables them to produce acid gas bombs to deter predators such as ants. In extreme cases they may bombard predators with a lethal dose of these chemical bombs that they kill them. The acid bombs consist of two chemical compounds stored separately in the beetle's abdomen. When threatened, the beetles combine the two compounds, resulting in the production of a boiling mixture that explodes out of the tip of the directional abdomen as a gas.

You'd think this remarkable "weapon" was surely the precursor for a superpower. And the superheroes Anarchist and Zeitgeist (members of X Force) both have acid generation powers. Anarchist secretes an acid–like sweat, whereas Zeitgeist spews acidic vomit. But these are hardly formidable weapons. Perhaps it is time that some superheroes caught up with the amazing set of powers that have already evolved in the animal kingdom.

This article is an adapted extract from a chapter in "The Secret Science of Superheroes" published by the Royal Society of Chemistry.