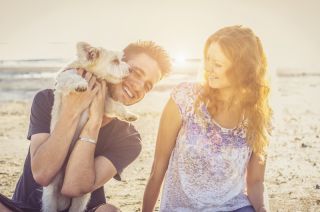 That "squeee!" you feel when you look at pictures of cute puppies or bunnies might be good for your love life. A new study finds that looking at baby-animal photos may increase couples' levels of satisfaction with their relationships.

"I was actually a little surprised that [this strategy] worked," lead study author James K. McNulty, a psychologist at Florida State University, said in a statement. One reason he was surprised it worked was that "just the idea that something so simple and unrelated to marriage could affect how people feel about their marriage made me skeptical," he said. [I Don't: 5 Myths About Marriage]

In the study, the researchers looked at 144 married couples who had been married for less than five years. The participants' average age was 28. Around 40 percent of the couples had kids, the researchers said.

It also turned out that the people who had viewed the pleasant images were more likely to become more satisfied with their marriages over the study period than those who had viewed the neutral images, the researchers found. [13 Scientifically Proven Signs You're in Love]

The new findings show that this type of intervention may help to change people's levels of marital satisfaction without changing spouses' behaviors, according to the study, which was published in June in the journal Psychological Science. Further studies are needed to confirm the findings in other groups.

The mechanism behind the new findings is unclear, the researchers said. However, it is possible that looking at a partner's photos paired with photos of puppies or other cute images may help to create or strengthen associations between the partner and positivity in a person's memory, the researchers said.