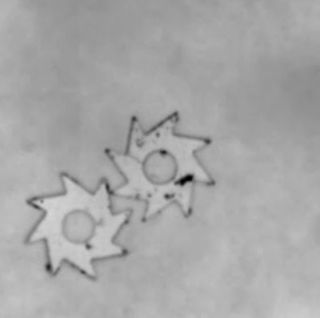 The power of swimming bacteria can be harnessed to turn tiny gears, opening the possibility of building hybrid biological machines at the microscopic scale.
(Image: © Igor Aronson)

Scientists have demonstrated a way to harness the motion of swimming bacteria to turn tiny gears. This bacteria-driven mechanism could someday power micro-machines that combine living organisms and man-made materials. To build their rudimentary device, the research team first fashioned silicon gears measuring a mere 0.01 inches (380 micrometers) across and 0.002 inches (50 micrometers) thick. With their slanted teeth, the gears look rather like tiny ninja stars. The microgears were then placed into a nutrient broth swarming with the microbe Bacillus subtilis, the workhorses in this setup. When supplied with nutrients and oxygen the bacteria scoot about randomly. When their concentration becomes high enough, though, the microorganisms exhibit what is known as collective swimming. “Once they cross a certain threshold, the bacteria make a flow as they swim and other bacteria get pulled into this flow,” explained study team member Igor Aronson, a physicist at Argonne National Laboratory in Illinois. In the experiment, some of these self-propelled bacteria got caught behind the gear’s teeth but still continued to push forward. Though the gear weighed millions of times as much as an individual bacterium, the cumulative force of hundreds of the little swimmers succeeded in getting the gear to rotate.   Crucially, the researchers found that by adding oxygen they could increase the bacteria’s pace, making the gears turn faster, while adding nitrogen slowed things down. “This lets us control the system,” said Aronson. This spinning was also demonstrated using two gears, whose teeth ratcheted the other gear along as cogs might in a full-fledged machine. Real-life micro-machines Even at full tilt, however, the gears achieved only a couple of revolutions per minute with power generation on the scale of quadrillionths of a watt – orders of magnitude below what real-world machines need. But scaled-up versions could power biomechanical micro-machines and have the ability to adapt to their environment and even repair themselves, Aronson told TopTenREVIEWS. Anita Goel, chair and scientific director of Nanobiosym, a nanotechnology company, thinks the new study is promising. “It provides tools and approaches to harness and even employ biological machines to achieve desired tasks on small scales,” said Goel, who was not involved in the research. Study author Aronson points out that yoking microorganisms as miniature beasts of burden may not be the best route for developing real-life applications. Instead, scientists may prefer to design tiny robots that swim in the same way as the bacteria. The research was detailed in a recent issue of the journal for the Proceedings of the National Academy of Sciences.