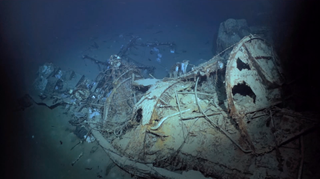 The ship was found more than 12,000 feet (3,700 meters) underwater along the Malta Escarpment, a fault zone offshore of eastern Sicily.
(Image: © R/V Petrel)

Nearly 77 years after it sank during World War II, the wreck of an Italian naval ship has been discovered in the waters of the Mediterranean Sea.

The naval destroyer, dubbed IT Artigliere, was damaged during the Battle of Cape Passero in 1940. The ship was found more than 12,000 feet (3,700 meters) underwater along the Malta Escarpment, a fault zone offshore of eastern Sicily.

The finding was announced yesterday (June 5) by Vulcan Inc., a company created by Microsoft co-founder Paul Allen. Vulcan's research vessel (R/V) Petrel made the discovery in March, according to the company. [In Photos: WWII Ship Discovered 77 Years After Sinking]

The war grave site was left undisturbed, according to the R/V Petrel team.

"The Artigliere is in amazingly good condition other than the fact she was sunk in a war," David Reams, senior director for Paul Allen's maritime operations, said in a statement. "She's upright and easy to identify. At 3,700 meters down, the water is very cold and has little oxygen, so there was very little corrosion or encrustation."

After the R/V Petrel team uncovered the shipwreck, a remotely operated underwater vehicle (ROV) captured images of the wreck, which showed the letters "AR" on the hull, according to a post on Allen's website. This documentation, along with the location of the wreck, enabled Italian naval authorities to confirm the sunken destroyer's identity.

The R/V Petrel uses underwater technology for a host of missions, ranging from locating shipwrecks to exploring ocean ecosystems, according to Vulcan researchers. Previous discoveries made by the vessel include the wreck of the Japanese battleship Musashi in March 2015. The R/V Petrel also provides an underwater tour of the sunken Musashi.