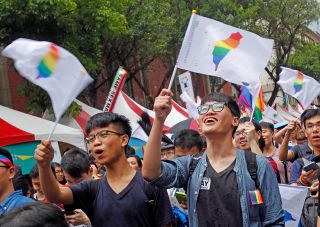 A ruling by Taiwan's Constitutional Court this morning paves the way for the island to become the first place in Asia to approve same-sex unions.

The Constitutional Court, Taiwan's top court, decided today (May 24) that an article of Taiwan's Civil Code violated the constitution because it stated that only a man and a woman could marry. The judges' ruling gives the parliament two years to amend or enforce the new law, according to CNN.

The case is a hard-fought victory for Taiwan's LGBT (lesbian, gay, bisexual and transgender) community, which has spent decades campaigning for equal rights and has organized large protests during the past several months to raise awareness about the cause, CNN reported. [10 Milestones in Gay Rights History]

While same-sex marriage has gained support throughout the globe since the early 2000s, Asian countries have not jumped on board. Gay people are arrested and beaten in Indonesia, gay sex is criminalized in Singapore and LGBT groups face crackdowns in mainland China, according to The Washington Post.

Meanwhile, some gay armed-service members are facing criminal investigations in South Korea, and gay marriage is not recognized in Japan except in a few cities and wards, according to CNN.

Given the laws and practices of its neighboring Asian countries, Taiwan has become a beacon for LGBT rights, especially considering today's court decision. While LGBT people still face stigma and discrimination in Taiwan, the island's school textbooks promote equality; gay and lesbian soldiers serve openly in the military; and Taipei has a well-known, annual gay pride parade, The Washington Post reported.