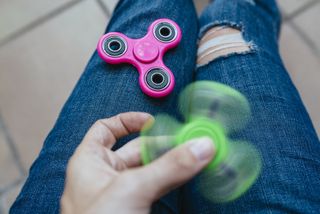 Fidget spinners are one of the year's hottest toys, and while the devices can be a distraction in the classroom, they seem to be sparking a conversation about how to help kids pay attention, experts say.

The toys are made of plastic or metal with a ball bearing in the center so a person can spin it between his or her fingers. Manufacturers suggest that as kids spin the toy on their finger or elsewhere, they will relieve their need to fidget and thus be able to focus on the classroom lesson. Some marketers also claim the toys may improve concentration in people with attention deficit hyperactivity disorder (ADHD), autism and anxiety. However, some schools have banned the trendy toy from classrooms because teachers say kids' frequent use of them has become too distracting. [Fidget Spinners: What They Are, How They Work and Why the Controversy]

Even so, the wild popularity of fidget spinners is renewing interest in the topic of children's attention spans and how to help youngsters focus, said Megan McClelland, a professor of child development at Oregon State University who has conducted research on attention spans in preschool children.

Here are some important things to know about the science of attention, and what strategies may really keep children focused at school:

A few small studies have suggested that there may be a relationship between fidgeting and attention, but this research has focused mainly on people with ADHD. In a 2016 study published in the journal Child Neuropsychology, researchers looked at 10- to 17-year-olds with ADHD and compared them with similar-age kids without ADHD. In both groups, the kids completed a computer-based task while wearing a monitor on their ankle to track leg movement, as a measure of fidgeting.

The study found that the kids with ADHD showed improvements in accuracy on the computer-based task when they fidgeted compared with when they didn't. The researchers didn't find that same link between fidgeting and better attention in children without ADHD; these kids' test scores were not better when the kids fidgeted, said lead study author Julie Schweitzer, director of the ADHD program at the University of California, Davis, MIND Institute. [Pay Attention! 5 Tips for Staying Focused]

"Fidgeting in children with ADHD may be an unconscious attempt to maintain attention," Schweitzer said.

However, her team's study looked at people's natural movements, such as foot tapping, as an indication of fidgeting. This is not the same as introducing a spinning toy that could be distracting to other students and could impact students' performance in a classroom, she noted.

Measuring attention spans in children can be a challenging task, said Anna Fisher, an associate professor of psychology at Carnegie Mellon University in Pittsburgh. Fisher has investigated the relationship between "sustained attention," or the ability to concentrate on one activity at a time, and learning in children.

It's easier to study attention in infants because a baby's attention can be captured by environmental stimuli, such as a parent holding a colorful object, Fisher said. To gauge attention in this age group, researchers can measure how long an infant may be content to sit and look at an object, she said.

As children become age 3 and older, it is more difficult for researchers to precisely measure attention.

As they get older, children can regulate sustained attention through the brain's prefrontal cortex, a region involved in "executive function" that allows people to set goals, plan, focus attention and ignore distractions while working on a task, Fisher said. As the prefrontal cortex matures, children develop the ability to control this brain region internally, she said.

"Attention is a complex activity, and a researcher is measuring multiple things at once," Fisher told Live Science. That's why it could be difficult for a researcher to attribute a child's success on an assigned task largely to attention, because memory and other cognitive processes could also play roles, she explained.

Are kids' attention spans getting shorter?

Although there is a perception that kids today have shorter attention spans than previous generations, there are not a lot of good long-term studies to back up this assumption, McClelland said. Even so, there is some indication that kids' attention spans have lessened as multitasking has increased with the digital age, she said.

The digital age has ushered in more distractions and more sources of stimulation to compete for children's attention, which, in turn, may cause them to lose interest in a task more quickly and turn to something else, McClelland said.

With more competition for a child's attention, he or she might need more self-discipline to tune out these distractions, Schweitzer said. [7 Ways to Short-Circuit Kids' Mobile Addiction]

To get people's attention, electronic devices may have created a societal expectation for more visual images, more active feedback and quick interactions, Schweitzer told Live Science. As a result, she suspects some kids may have trouble paying attention while sitting in a classroom and listening to a lecture, and teachers may need to change the way they present material and interact more with students by providing lots of feedback.

Attention span is like a muscle you can exercise, with lots of potential to make it stronger, McClelland told Live Science.

During certain times in children's development, their executive function skills, which lay the foundation for attention, are more malleable, McClelland said. One of these windows occurs during early childhood, from ages 3 to 8, when there is a rapid increase in brain development, she said. Two other key periods for brain development occur during the transition to adolescence and the transition to adulthood, she noted.

To take advantage of these important times when attention can be strengthened, three experts shared the following tips to help improve a child's attention:

Take activity breaks. If a child's attention is flagging at home during a homework assignment, for example, suggest that the child do something active, such as getting up and stretching, walking around or doing some brief physical activity, Schweitzer said.

Build in natural breaks. If a child is working on a homework assignment with 40 problems, for example, allow the child to take a break after he or she completes every 10 or 20 problems are completed, Schweitzer suggested. Brief mental breaks, which can include doing something physically active, might improve attention during the task.

Cultivate self-discipline. There is some evidence that activities that rely on self-discipline — such as martial arts, dance and gymnastics — may help increase a child's attention, McClelland said.

Change game rules. With younger children, parents can add a new rule to a familiar game such as Red Light, Green Light, where red typically means freeze and green means go, McClelland said. The new rule can ask the child to do something opposite from the way he or she normally plays the game, such as "Purple means go," she suggested. This technique may cause children to focus more, pay attention and build self-control.

Minimize distractions. Lessen the environmental stressors that may be distracting children, Fisher said. If music is blaring in the background or the TV is constantly on, it will be difficult to concentrate on homework, she said. Environments with less noise and visual stimulation help reduce the competition for a child's attention, Fisher said.

Discover your child's unique interests. Find out what your child is most interested in, and come up with fun ways to engage these interests through books, games or activities, McClelland said. Kids will learn from information that captures their attention, and this may increase their focus in other settings, she suggested.

Try an app. Fisher recommended the app Vroom for parents and teachers of young children ages 1 to 5. It provides a free daily brain-building activity for the preschool set and may boost cognitive skills and self-control in this age group, she said.