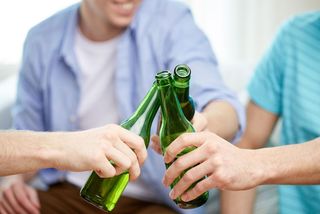 Teen drinking has dropped in recent decades, but still about one-third of U.S. high schoolers say they drink alcohol, and one in six say they binge drink, according to a new report.

The study, from the Centers for Disease Control and Prevention, analyzed information from a yearly survey of high school students, conducted from 1991 to 2015.

In addition, the percentage of high schoolers who said they binge drank — meaning they consumed at least five alcohol drinks within a couple of hours — dropped from 31 percent in 1991 to about 18 percent in 2015. [Here's How Much Alcohol Is OK to Drink in 19 Countries]

But, concerningly, more than half of high schoolers who reported recent alcohol consumption in 2015 were binge drinkers. And of those who binge drank, about 44 report said they consumed eight or more drinks in a row. Binge drinking increases a person's risk of harms from alcohol, such as unintentional injuries, alcohol poisoning and violent behavior, the researchers said.

"Despite progress, current drinking and binge drinking are common among high school students, and many students who binge drink do so at high intensity," the researchers wrote in the May 12 issue of the CDC journal Morbidity and Mortality Weekly Report. Strategies such as increasing taxes on alcohol and regulating the number of outlets that can sell alcohol in a given area may help reduce underage drinking and the harms from it, the researchers said.

The study also found that most high school drinkers who didn't binge drink obtained alcohol from someone who gave it to them. Those who binge drank were about three times more likely to give someone money to purchase alcohol or to purchase alcohol themselves, compared to those who consumed alcohol but did not binge drink, the study results showed.

The researchers noted that the study involved only teens who attended high school, and so the findings may not be representative of all U.S. teens.