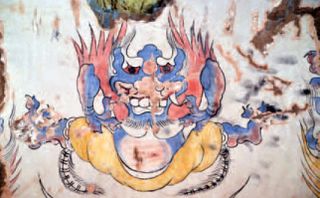 This monster-like creature, as archaeologists call it, was found on the vaulted ceiling of the tomb's corridor.
(Image: © Photo courtesy Chinese Archaeology)

A blue monster, a winged horse and a nude deity known as the master of wind are just a few examples of fantastic images that archaeologists recently discovered in a 1,400-year-old tomb in China.

"The murals of this tomb had diversified motifs and rich connotations, many of which cannot be found in other tombs of the same period," a team of archaeologists wrote in an article recently published in the journal Chinese Archaeology.

The meaning of some of the imagery is not fully understood. The archaeologists did not speculate on why the master of wind is shown nearly naked while running in the general direction of a burial chamber, or what the vivid-blue, monster-like creature (as archaeologists call it) represents. [See Photos of the Fantastical Murals and Ancient Tomb]

Archaeologists first learned of the tomb in the spring of 2013, finding that "the tomb had been recently looted," the archaeologists wrote. A team from Shaanxi Provincial Institute of Archaeology excavated the tomb, which is located in modern-day Xinzhou city, in 2013 and 2014.

The archaeologists found that the tomb's burial chamber had been heavily looted, with the bodies of the tomb occupants missing and only a few coffin fragments remaining. However, the team found that parts of a passageway and corridor had not been robbed and a number of artifacts, as well as many well-preserved murals, remained untouched.

The murals the team found included not only fantastic mythical imagery but also more grounded scenes, such as people trading horses, hunting and working in a gatehouse.

"Themes on ascending to heaven, horse trading, hunting, [a] grand gatehouse and the rich styles of costumes all provide valuable information for the [research] on the social life, history, culture and military practices," the archaeologists wrote.

Numerous archaeologists have noted that China's hot antiquities market, in which artifacts fetch prices sometimes reaching into the millions (in USD), has fuelled an increase in the looting of ancient tombs.

To give but a few examples, in 2015 archaeologists reported finding the remains of a game board and 14-sided die in a heavily robbed 2,300-year-old tomb, while in 2013, police found a 1,500-year-old tomb just before robbers had finished stealing its murals.

Law-enforcement officers and archaeologists in China have often found themselves in a race against time to discover and excavate ancient tombs before thieves take the artifacts and sell them on the antiquities market, many archaeologists and media outlets have reported. Large law-enforcement operations have also taken place to try to retrieve stolen artifacts. In 2015, the Xinhua News Agency reportedthat one massive law-enforcement operation resulted in the recovery of more than 1,100 artifacts and the arrest of more than 170 people allegedly involved in the looting of ancient tombs.

The archaeologists who recently excavated the 1,400-year-old tomb in Xinzhou reported their findings, in Chinese, in 2015 in the journal Kaogu. That report was translated into English and was recently published in the journal Chinese Archaeology.