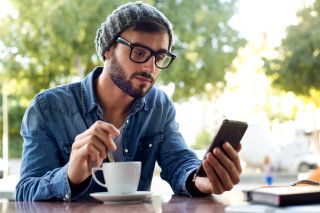 Showing a bit of creativity on your online dating profile could make you appear more attractive to potential dates, a new study suggests.

In the study, people were asked to rate the attractiveness of individuals in photos who were said to have written a short piece of creative writing to display their creativity.

The findings suggest that "creativity can enhance your attractiveness both as a potential date and as a potential social partner [or] same-sex friend," said study author Christopher Watkins, a lecturer in psychology at Abertay University in Scotland. [5 Ways Love Affects the Brain]

But the attractiveness-boosting effects of creativity don't work for everybody.

In addition, in some cases, the men got a larger boost in their attractiveness from being creative than women did, according to the study, which was published Wednesday (April 19) in the journal Royal Society Open Science.

This finding — that creativity may be more beneficial for men — makes sense considering previous findings: A man may use "creative displays" to "signal" his desirable qualities, such as intelligence, to a potential female date, Watkins said.

In the study, Watkins did three experiments, all of which involved asking people to rate the overall attractiveness of people in photos. The specific details of each experiment varied slightly, but in general, photos of people, who varied in their levels of physical attractiveness, were paired with short pieces of creative writing, which the person in the photo was said to have written. To simplify matters, photos were either considered "attractive" or "less attractive" (in other words, good-looking or average-looking), and the creative writing "creative" or "less creative."

A group of young adults, both men and women, was asked to rate the overall attractiveness of the individual, according to the study.

When photos of men were paired with a creative piece of writing, the people in the study rated them, on average, as attractive overall — regardless of whether the photo was that of a good-looking man or an average-looking man, Watkins found. In other words, creativity helped boost average-looking men's attractiveness.

But for women, in two of the experiments, it was the physical attractiveness rating that played more a role in their overall attractiveness, according to the study: Women who were deemed good-looking were seen as more attractive overall, regardless of their level of creativity.

Watkins also found, unexpectedly, that creativity made women with average-looking photos even less attractive, and didn't boost the attractiveness of women who were already considered good-looking.

The finding that creativity made certain women less attractive may suggest that creative women who are considered average-looking are subtly put down, Watkins wrote.

In other words, in this experiment, "creativity enhanced the appeal of both men and women with average-looking faces," Watkins said.