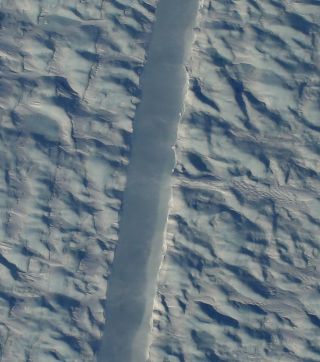 An image of the new rift taken directly beneath the Operation IceBridge aircraft.
(Image: © Gary Hoffmann/DMS/NASA)

There is a new crack in one of Greenland's largest glaciers, and NASA researchers have captured the first images of the ice shelf's mysterious rift.

Operation IceBridge, NASA's airborne survey of polar ice, recently completed a land-ice mission over northwest Greenland. During the mission, researchers flew over and photographed a new rift near the center of Petermann Glacier's ice shelf (the floating end of the glacier). In the survey photos, the new rift appears relatively close to a larger, known crack that is spreading toward the center of the ice shelf. [Images: Greenland's Gorgeous Glaciers]

Part of Petermann Glacier's ice shelf could break off if the two rifts intersect, but researchers with Operation IceBridge said in a post on Facebook that the "medial flowline" (the flow of ice in the middle of the ice shelf) could keep the new rift from advancing.

Petermann, one of Greenland's largest glaciers, has shrunk in recent years. Previous rifts have resulted in massive icebergs breaking away from the glacier. In 2012, an iceberg the size of Manhattan broke away from the glacier's ice shelf. In 2010, another iceberg, this one four times the size of Manhattan, dropped, or calved, from Petermann. It was one of the largest ever recorded in Greenland, Live Science had reported.

The glacier's new rift was discovered by Stef Lhermitte, an Earth sciences professor at Delft University of Technology in the Netherlands, while studying satellite images of the area, reported The Washington Post. Lhermitte provided coordinates of the chasm to Operation IceBridge so that researchers could conduct an aerial survey of the ice shelf.

"[It's] amazing to see the rift from nearby after studying it from space for several days," Lhermitte told The Washington Post. "From these images alone, it is difficult to already say anything about what exactly caused the crack on this unusual spot."

Glaciers typically crack along their sides. A rift in the center of the floating ice shelf could be due to the warming ocean waters beneath the shelf, Lhermitte hypothesized, according to The Washington Post.

In other parts of the world, researchers have observed warm ocean waters that are melting ice shelves from below and weakening them at the center. A recent study of Antarctica's Pine Island Glacier showed that subsurface cracks in the glacier were likely caused by melting underneath the floating ice shelf.