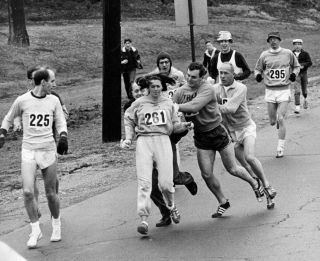 Kathrine Switzer running the Boston Marathon in 1967. At one point during the race, an official tried to push Switzer off the course.
(Image: © Paul Connell/The Boston Globe/Getty)

The first woman ever to run the Boston Marathon as an official entrant will run the race again today at age 70, fifty years after her historic feat.

When Kathrine Switzer first ran the marathon in 1967, women were not allowed to compete. However, she registered for the race with the name "K.V. Switzer" in order to hide her gender, according to the New York Times. This meant she received an official race number. (One year earlier, in 1966, a woman named Bobbi Gibb completed the Boston marathon, but she ran unregistered, without a race number.)

"The marathon was a man's race in those days; women were considered too fragile to run it," Switzer wrote in a 2007 essay for the New York Times. "But I had trained hard and was confident of my strength." [5 Most Amazing Marathon Feats]

At one point during the 1967 race, an official tried to push Switzer off the course. But, she continued running, and finished the race in 4 hours and 20 minutes.

The Boston Marathon was officially opened to women runners in 1972.

The oldest woman to complete a marathon is Harriette Thompson, who ran the San Diego marathon at age 92 in 2015, according to the Washington Post.