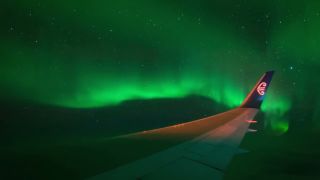 The southern lights, less-photographed than their northern counterparts, are seen from the air in a recent charter flight from New Zealand.
(Image: © Stephen Voss/YouTube)

On March 23, airline passengers caught a breathtaking view of the aurora australis — the spectacular celestial light show also known as the southern lights — from midair, on a flight booked to fly them into the heart of the light display.

The charter flight to the aurora was the first of its kind in the Southern Hemisphere. It flew 134 passengers on a round-trip journey to the Antarctic Circle from Dunedin Airport (DUD) in New Zealand on Air New Zealand flight NZ1980, a Boeing 767-319(ER), according to FlightRadar24, a site that tracks air traffic in real time.

They departed from DUD on New Zealand's South Island on March 23 at 9:23 p.m. local time and returned to DUD on March 24 at 4:54 a.m., with a flight time of 7 hours and 31 minutes, FlightRadar24 reported. [Intricate Aurora Details Seen From Space | UHD Video Montage]

Astronomer Ian Griffin, director of the Otago Museum in Dunedin, organized the trip, announcing the landmark air experience in October 2016. Tickets were sold in pairs — window and adjacent seats only — and were priced at 3,950 New Zealand dollars ($2,776) per pair in economy and NZ$8,500 ($5,972) per pair in business class, according to the New Zealand Herald. They sold out in only five days, the Associated Press (AP) reported.

Griffin was inspired to arrange a commercial charter flight to the southern lights after glimpsing them from the air himself while on board the Stratospheric Observatory for Infrared Astronomy (SOFIA) — a Boeing 747 housing a powerful NASA telescope — he told TVNZ in October.

Though the sight wasn't new to Griffin, he described the view to the AP as "absolutely brilliant."

"We were right under it. There were beautiful streamers, auroral streamers. This green-colored stuff that moves quickly, it looks like you're looking into a green, streaky river," he said.

Using the hashtag #flighttothelights, passengers shared stunning images of the aurora on social media. When artist and photographer Rene Burton uploaded a photo to Instagram showing the airplane wing backlit by the glowing green lights, he added another hashtag: #nofilterneeded.

Video posted on YouTube showed a fast-moving point of light appearing outside the airplane about 23 seconds into the footage, leading some commenters to question whether the camera operator had glimpsed a meteor.

But the passenger who shot the video, Stephen Voss, a medical doctor and astrophotographer, replied in a YouTube comment that the object only appeared to be fast-moving because the video was shot as a time lapse. In real time, the object was moving far too slowly to be a meteor or comet and was likely a satellite, "possibly the International Space Station," Voss replied.

Voss captured the 24-second video clip as the plane flew south, on an intercept course with the 66th parallel — a latitude circle found 66 degrees south of the Equator — and the international date line, he wrote in the video description.

Auroras — bands of eerily glowing light that undulate unpredictably in the night sky —commonly occur at high northern and southern latitudes, and are known as the aurora borealis in the Northern Hemisphere and the aurora australis in the Southern Hemisphere, according to NASA.

These mysterious displays are dynamic, with the light forming shapes that are constantly shifting and changing. Auroras are produced when the sun's energy and particles travel down magnetic field lines at the North and South poles. When these charged particles interact with atmospheric gases, the result is a beautifully colored light show. Auroras are typically greenish in color, though they can also be white, violet, blue, pink or red.

While aurora displays are beautiful to look at from afar, the electron activity that generates the light shows can disrupt electricity and communications networks on Earth, according to NASA.