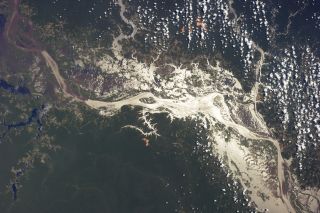 An astronaut aboard the International Space Station use the Sun’s reflection point to reveal features of the Amazon River in a photo captured on August 19, 2014.
(Image: © NASA Earth Observatory)

The Amazon River has been around three times longer than scientists had suspected, according to a new estimate that pegs the age of the meandering lifeline at around 9 million years.

The second-longest river, after the Nile, the Amazon supplies one-fifth of the freshwater that enters the global oceans. The emergence of the Amazon River was a "defining moment" in the past geography of South America, "forming both a bridge and a divider for biota in the Amazon landscape," according to a statement about the study from the University of Amsterdam.

As such, understanding its origins will give scientists more information about a consequential body of water, they said. [The World's 10 Longest Rivers]

However, the river's beginning is difficult to date due to an incomplete geologic record, and a difficult-to-access marine record — where ancient sediments from the river were deposited into the ocean. As such, estimates of the river's age have ranged from as young as 2.6 million years, to as old as 11 million years.

In the new study, scientists analyzed sediment from a borehole more than 2.8 miles (4.5 kilometers) below sea level, where the Amazon River drains into the ocean offshore of Brazil. In their analysis, the researchers found there was a distinct change in the sediment and residual plant matter during the late Miocene (9.4 million to 9 million years ago). These changes indicated that before 9.4 million years ago, the source of that material came from a river in the tropical lowlands; after that time, the riverine source was in the Andes mountain range — therefore, the onset of the Amazon River cutting across the continent.

"We were able to narrow down the age of onset of the Amazon River because we sampled the transition interval in a classical section of the Amazon submarine fan, where the sediments transported by this river are deposited and as a result accurately record its evolutionary history," senior author Farid Chemale, a professor of geosciences and geology at the Universidade do Vale do Rio dos Sinos, São Leopoldo, said in a statement. "We applied high-resolution analytical techniques not previously performed in the region."

Beyond dating the river, the researchers also determined changes in the plant life in the basin, which is the area over which the river water reaches, over time. In particular, the sediment analysis showed how the ecosystem responded to global cooling during the Plio-Pleistocene (5 million years ago to 12,000 years ago). According to the researchers, the cooling climate led to the growth of grasses in the region.

"Our new data confirm an old age for the Amazon River and also point at an expansion of grasslands during the Pleistocene that was not known before," said lead author Carina Hoorn, a biodiversity and ecosystem researcher at the University of Amsterdam.

The research is detailed in a study published online March 20 in the journal Global and Planetary Change.