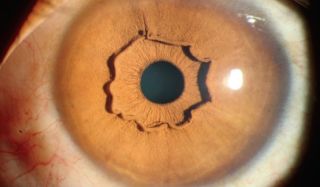 This image shows the protruding iris collarette of the woman's left eye, taken during an eye exam.
(Image: © The New England Journal of Medicine © 2017)

Peering into the eyes of a 37-year-old woman in China, doctors were surprised to see a raised, rippled ring of tissue, encircling her irises in both eyes.

The iris is the colored part of a person's eye, and has different layers and textures, said Dr. Andrea Thau, the president of the American Optometric Association, who was not involved with the new report of the woman's case. The collarette is the middle portion of the iris, found between the dark pupil that fills the center of the iris and the limbus, which is the outer edge of the iris, where the white part of the eye begins, Thau said. [Here's a Giant List of the Strangest Medical Cases We've Covered]

The iris collarette is also the thickest part of the iris, Thau told Live Science.

The image of the woman's eye shows that her case of protruding iris collarette was a particularly pronounced one, Thau said. Generally, in people with this condition, the raised ring of tissue is not as prominent as that seen in this woman, Thau said.

Still, Thau said that she has seen patients with protruding iris collarettes, and the condition is not rare.

The cause of a protruding iris collarette is unknown, and people who have the condition are born with it, Thau said. The condition is completely harmless and isn't associated with any vision problems, she added.

Indeed, in the woman's case, the striking feature wasn't causing any problems, the report said.

The reason she had gone to the doctor was that she had itchy, watery eyes — symptoms that turned out to be simply due to allergies, the doctors who treated the woman wrote in a brief report of the case, published Wednesday (March 15) in The New England Journal of Medicine.

In fact, aside from allergy symptoms, the woman's eyes were deemed healthy and her vision was normal, Dr. Lingyi Liang, an ophthalmologist at the Zhongshan Ophthalmic Center in China and the senior author of the case report, told Live Science in an email. The woman's vision was 20/20, the pressure in her eyes was normal, and her eyes adjusted properly to light and distance, the doctors wrote in the report.

The doctors gave the woman allergy medications for her itchy eyes and assured her that the interesting eye feature was nothing to worry about, the doctors wrote.