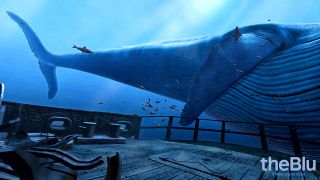 Visitors to the Natural History Museum of Los Angeles (NHMLA) can now immerse themselves in spectacular ocean environments alongside a bevy of sea creatures with a new virtual-reality exhibit.

Curators and administrators at the NHMLA worked closely with designers from the VR firm Wevr to craft a three-episode encounter — the museum's first VR experience — within specially designed spaces. The collaboration not only mimics the feeling of being underwater as closely as possible, but also presents a series of narratives about the ocean's different environments and wildlife. [TheBlu: An Underwater VR Experience | Video]

Before embarking on the virtual tour, participants enter an area in the museum with real marine specimens on display, which provides a visual introduction to the underwater experience. A "dive master" assigned to each user helps to prepare those who are unfamiliar with VR technology, Lori Bettison-Varga, director of the NHMLA, told Live Science in an email.

In the first part of "TheBlu," users alight on the deck of a sunken ship, a relic that helps them visually adjust to the scale of the underwater world and prepare themselves for the first big encounter — a blue whale swimming by.

The next portion of the journey transports users to a peaceful coral reef — amid a migration of thousands of jellyfish.

Finally, in the third episode, participants descend to the darker depths of the ocean along with the remains of a dead whale, finding a dark abyss inhabited by strange creatures that glow when illuminated with a virtual flashlight. The beam of light also beckons the creatures closer to the participants.

"The concept of something that large falling to the bottom of the ocean floor and then becoming an ecosystem for the surrounding ocean life sounded like a unique space to explore," Jake Rowell, director of "TheBlu," told Live Science in an email.

Producing captivating VR content requires the artful combination of many elements, including visuals, audio, and interactivity on both large and small scales, enveloping the people holding the controllers and allowing them to feel "a sense of presence" within the world they inhabit in virtual space, Rowell explained.

Encountering a life-size blue whale is especially awe-inspiring in VR, he added.

"Coming face-to-face with an 80-foot blue whale is pretty special and unique," Rowell said. "You can only get the scale of a marine creature that large by either being next to it in the ocean or being in virtual reality."

The wonder inspired by glimpsing a realistic ocean habitat, including its marine life, in such close proximity in VR builds appreciation for the real-world animals and their lives in the sea, Bettison-Varga told Live Science.

"We are hoping this leads to questions about environmental stresses on the oceans that will generate a greater sense of responsibility for marine habitats," she said.

Future NHMLA forays into VR could incorporate research conducted at the museum, and could introduce visitors to more of the 10 million specimens in the marine collection, of which only a fraction are currently on display, Bettison-Varga said.

"TheBlu: An Underwater VR Experience" is on display at the NHMLA until April 28.