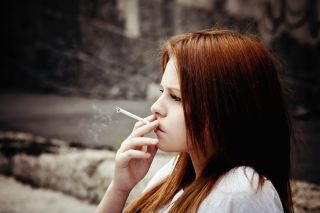 Today's teen smokers may have worse mental health than teen smokers of years past: The group has experienced a spike in depression in recent years, according to a new study.

Researchers found that, among smokers ages 12 to 17, the percentage who had depression increased from 16.0 percent in 2005 to 22.4 percent in 2013. That was the biggest increase in depression seen in the study, which looked at rates of depression among current smokers, former smokers and people who had never smoked, ages 12 and older.

The high rate of depression among teen smokers may make it harder for them to quit the habit, because depressed mood is known to pose a challenge to successfully stopping smoking, the researchers said. [8 Tips for Parents of Teens with Depression]

"The very high rates of depression among the youngest smokers, those aged 12 to 17, is very concerning, as it may impair their ability not only to stop smoking, but also to navigate the important developmental tasks of adolescence that are important for a successful adult life," study co-author Deborah Hasin, a professor of epidemiology at Columbia University's Mailman School of Public Health, said in a statement.

The findings suggest that it may be useful to consider whether a teen smokes when screening him or her for depression, the researchers said. In addition, "public health efforts aimed at decreasing the prevalence of smoking must take depression into account," because treating a person's depression may boost the chances that he or she will successfully quit smoking, said study leader Renee Goodwin, an adjunct associate professor of epidemiology at the Columbia University Mailman School of Public Health.

Here are some other key findings from the study:

Originally, the researchers hypothesized that conditions such as depression may be contributing to the slower decline in smoking quit rates that's been seen in recent years. The new finding that depression rates tend to be higher in smokers today than in smokers a decade ago, supports this hypothesis. The new findings also suggest that increases in depression among certain groups, such as teens, could be contributing to the stability of smoking rates, they said. (Smoking rates declined substantially from 1965 to 1990, dropping from 42 percent to 25 percent during that time. But since then, the decline has slowed, and about 18 percent of people identified as smokers in 2014, the researchers said.)

Finally, the researchers said more research is needed to look at factors that may be leading to the current increase in depression among the U.S. population as a whole.

The study was published online Jan. 11 in the journal Drug and Alcohol Dependence.