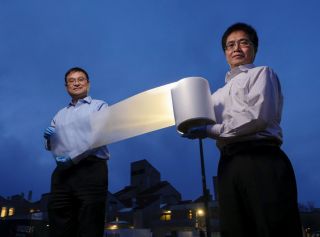 A new material that is as thin as aluminum foil can be used to cool houses or power plants without using any electricity or water. The material manipulates the properties of light to reflect the sun's rays while allowing objects beneath it to passively radiate heat to cool off.
(Image: © Glenn Asakawa)

A heat-reflecting, futuristic supermaterial that looks like a roll of plastic wrap could one day cool both houses and power plants without using any energy, according to a new study.

Unlike solar panels, the material keeps working even when the sun sets, with no additional electricity. And the plastic wrap is made up of cheap, simple-to-produce materials that could be easily mass-produced on rolls.

"We feel that this low-cost manufacturing process will be transformative for real-world applications," Xiaobo Yin, a mechanical engineer and materials scientist at the University of Colorado Boulder, said in a statement.

When radiation, such as sunlight, hits an object, different wavelengths of light can be reflected, transmitted or absorbed, depending on the properties of the material. For instance, black-colored materials, such as asphalt, tend to absorb most incoming visible light, while pale or shiny objects tend to reflect that light. [50 Interesting Facts About Planet Earth]

Yin said he and his colleagues wondered whether they could manipulate the movement of light through a material so that the substance would efficiently cool objects passively, without using electricity. To do so, they looked to a giant: Earth, which on clear nights cools itself by radiating infrared light out into the cosmos. The catch is that Earth heats up tremendously during the day as incoming rays of sunlight bombard the planet.

However, the team suspected there was a way to harness radiative infrared cooling while simultaneously deflecting incoming rays from the sun, Yin said.

The team devised a three-compound metamaterial whose base layer is a sheet, slightly thicker than aluminum foil, made of the see-through polymer polymethylpentene. The researchers then randomly interspersed miniscule glass beads throughout the material and coated the bottom with a thin layer of reflective silver.

The glass beads were just the right size to induce a quantum effect known as phonon-polariton resonance. This effect occurs when a photon, or light particle, in the infrared spectrum interacts with vibrations in the atoms of the glass. The researchers found that when sunlight hit the top of the material, the glass beads and shiny silver bottom of the material scattered the visible light back out into the air. Meanwhile, infrared radiation passed from the bottom out through the top of the material, allowing whatever was beneath the material to cool off, the investigators said.

In total, about 96 percent of the sunlight that hit the material bounced back off, the researchers reported on Feb. 9 in the journal Science.

When the researchers tested the material in the field, they found that it created a cooling effect equivalent to about 110 watts per square meter over a 72-hour period and up to 90 watts per square meter when facing direct sunlight at high noon, the scientists said in a statement. That's about the same amount of power as is produced by a typical solar panel in those time periods. (The material passively cools, but does not actively provide power like a solar panel does).

"Just 10 to 20 square meters [107 to 215 square feet] of this material on the rooftop could nicely cool down a single-family house in summer," study co-author Gang Tan, a civil and architectural engineering professor at the University of Wyoming, said in a statement.

The new material could also be used to cool off thermoelectric power plants, which currently use water and energy to keep machinery cool, the researchers said. In addition, the new material could increase the lifetimes and improve the operating efficiencies of solar panels, which often get too hot to work efficiently, the scientists said.

"Just by applying this material to the surface of a solar panel, we can cool the panel and recover an additional 1 to 2 percent of solar efficiency," Yin said. "That makes a big difference at scale."