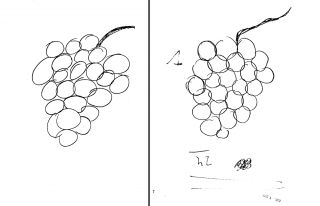 Mind over matter? One government test of paranormal abilities tasked alleged psychic Uri Geller with replicating unseen drawings, such as a bunch of grapes. Geller's result (right) was produced in isolation from the target illustration.
(Image: © PD-US)

When the CIA recently shared millions of pages of declassified documents online, the agency included a collection of files for what was arguably one of the U.S. Army's strangest initiatives: investigating psychic abilities for use by military intelligence.

Known as Stargate, the program launched in 1978 and lasted for two decades, exploring reports of so-called psychic phenomena that originated behind the Iron Curtain and around the world, and conducting experiments testing "mind control" techniques. [The 10 Most Outrageous Military Experiments]

The Stargate files were recently made available online as part of the CIA Records Search Tool (CREST) database, which included a total of 930,000 declassified files containing more than 12 million pages, CIA officials explained in a statement.

One of the CREST documents, a mission statement for Stargate stamped "Not Releasable to Foreign Nationals," described the project's goal: "To establish a program using psychoenergetics for intelligence applications."

A search on the Merriam-Webster dictionary site yields a discouraging "Words fail us" result for the term "psychoenergetics." However, the William A. Tiller Institute for Psychoenergetic Science defines psychoenergetics as energy exchanges that can be influenced by consciousness.

To understand how these energy exchanges could work — and how they might be used to benefit military intelligence — the Stargate project documented numerous reports of people using their minds to manipulate objects or read others' thoughts. The documents include accounts of spiritual healers in Russia and Mexico, "firewalkers" in Greece, assorted tales of poltergeists and hauntings, and experiments testing metal bending through mind control.

Stargate also conducted tests to see if psychic abilities could be performed on command under controlled circumstances. The well-known performer and alleged psychic Uri Geller participated in a series of experiments over eight days in August 1973. During these tests, researchers asked Geller to duplicate drawings that were produced by another person, whom he could neither see nor hear.

In one notable example, the word "bunch" was selected at random, and the control subject drew a bunch of grapes. Meanwhile, Geller was expected to duplicate this drawing while isolated in a room nearby that was shielded electrically and acoustically and had no window openings, the summary of the experiment said.

Geller first mused about seeing "drops of water," then described "purple circles." He finally said he was "quite sure" he had the picture, and proceeded to draw a bunch of grapes that had 24 globes in the cluster, the same number as in the control drawing.

His performance in this and other experiments provided convincing evidence of his psychic abilities, CIA observers wrote in the study. But overall, the Stargate program failed to amass enough data to support or replicate psychoenergetics activities, and was finally dissolved in 1998.