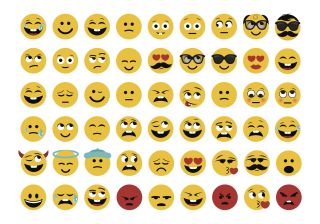 Are emojis the new body language? Right now, all scientists can say is ¯\_(ツ)_/¯ — which is why psychologists are calling for more research into why people use these symbols to communicate, and what it says about them when they do.

More than 90 percent of people who use the internet rely on emojis, according to the paper, published today (Jan. 17) in the journal Trends in Cognitive Sciences.

"We mostly use emojis like gestures, as a way of enhancing emotional expressions," Linda Kaye, a co-author of the new paper and a senior lecturer in psychology at Edge Hill University in England, said in a statement. But, she said, "there are a lot of idiosyncrasies in how we gesture, and emojis are similar to that, especially because of the discrepancies as to how and why we use them."

But when it comes to understanding how people express emotions, the vast majority of research has been limited to emotional expression during face-to-face interactions, the researchers wrote. [5 Ways Emotions Influence Your World (and Vice Versa)]

Emojis appear to act as a stand-in for nonverbal communication in typed messages, which lack the subtle nonverbal behaviors that people get through face-to-face interactions, the paper said. (Consider, for example, a time when you have puzzled over the tone of an email.)

Indeed, the first reported :-) popped up in discussion forums in the 1980s, where the symbol was used to indicate that a message was a joke, the researchers wrote.

One of the questions the researchers would like to answer is whether people use emojis similarly to how they would express emotion in person.

For example, online communications "may be more 'considered' and consciously controlled" than face-to-face expressions of emotion, which tend to be more spontaneous, the researchers said. It's possible that there are "unique underpinnings" that make communicating one's emotions with emojis different from communicating emotions with facial expression or body language in person, the researchers said.

In the paper, the researchers proposed that by studying the similarities between the "arguably parallel forms of face-to-face versus online behaviors," they may be able to determine whether emojis are actually representations of people's real emotions, or whether they represent something other than an emotion that the person wants to communicate.

In addition, previous research has suggested that how people use emojis may provide insight into the individuals' personalities, the paper said.

"If you look at personality traits, [such as] agreeableness [and] how amenable you are to other people, it seems to be related to whether you use emojis or not," Kaye said. Previous research has suggested that, for example, people who used more "happy" emojis were more likely to be open and agreeable.

Fortunately, delving into the research of how and why people use emojis may not be too difficult, the researchers noted, thanks in part to the troves of data available publically online.