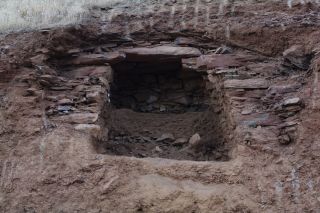 A 2,400-year-old tomb filled with the skeletons of at least six people has been discovered in northern Iraq. Among the artifacts found in the tomb is a bracelet decorated with images of two snake heads peering at each other.

The tomb was constructed toward the end, or just after, the time of the Achaemenid Empire (550 to 330 B.C.), an empire in the Middle East that was conquered by Alexander the Great in a series of campaigns, according to the archaeologists, led by Michael Danti, a professor at Boston University. The excavation results were presented by Kyra Kaercher and Katie Downey, graduate students at the University of Pennsylvania and The Ohio State University, respectively, in November 2016 at the American Schools of Oriental Research's annual meeting.

"The snake-headed bracelet was very popular in Achaemenid times," and helped date the tomb, the team of archaeologists told Live Science in an email. [In Photos: Ancient City Discovered in Iraq]

It's difficult for archaeologists to tell exactly how many people were originally buried in the tomb, as some of the skeletons were found in a jumbled state. That disarray indicates that someone had entered, and possibly robbed, the tomb in ancient times, the researchers noted.

Inside the tomb, the archaeologists also found a pair of bronze earrings and the remains of at least 48 pottery vessels, five of which were still intact.

"There were five complete vessels found in the tomb: one bridge-spouted jar, three pitchers and one miniature jar. They were all found near the heads of skeletons," the archaeologists wrote.

Archaeologists found that sometime between 400 and 1,300 years ago, the tomb, originally the home of the six-plus skeletons found, was reused, and at least five more people (probably more) were buried there. The heads of those skeletons, which were separated from the older bones by a layer of soil, were found facing west. The archaeologists did not find any artifacts dating to the more recent burials.

"Based on the lack of artifacts found with the skeletons and their locations … the tomb reuse probably dates to the Early or Middle Islamic period [eighth to 17th century A.D.], but without artifacts or carbon samples, this cannot be proved," the archaeologists told Live Science.

The researchers cautioned, however, that the time period for the more recent burials "does not mean these are Islamic burials," they wrote. "Historically, in this region, various religious groups have lived together, including Muslims, Christians, Yazidis, Zoroastrians and many others."

Islamic State group (also known as ISIS, ISIL or Daesh) militants destroyed, damaged and looted many heritage sites after they conquered part of northern Iraq during a military campaign in the spring and summer of 2014. This particular tomb was not in an area they took over. At present, ISIS still controls part of Mosul and a few small cities, towns and rural areas in northern Iraq.

Numerous archaeologists have also told Live Science over the past few years that during the rule of Saddam Hussein, archaeologists had little access to parts of northern Iraq and that a number of sites are in desperate need of conservation. Moreover, as construction projects (such as the road widening that led to the discovery of this tomb) take place, new archaeological sites will be discovered.