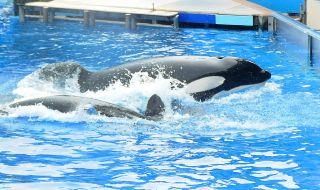 The killer whale "Tilikum" performs in a show at SeaWorld on March 30, 2011, in Orlando, Florida.
(Image: © Gerardo Mora/Getty Images)

Tilikum, a 36-year-old killer whale best known in recent years from the documentary "Blackfish," died today (Jan. 6), according to SeaWorld.

The male orca was involved in three human deaths during his approximately 34 years in captivity, including the 2010 killing of SeaWorld trainer Dawn Brancheau. The event was made famous by 2013's "Blackfish," which criticized SeaWorld for its handling of the incident.

But what of the whale Tilikum himself? Here's how he stacked up against his wild relatives:

Life span in the wild: According to the National Oceanic and Atmospheric Administration, male orcas typically live about 30 years in the wild, but can sometimes survive for up to 50 or 60 years. (Females live longer, with typical life spans of around 50 years and outliers who can live for up to a century.)

Time with mother: Approximately two years. Tilikum was captured along with two other juvenile whales off the coast of Iceland in 1983 and transported to a marine zoo in Reykjavík, Iceland, before being bought by Sealand of the Pacific, a now-defunct marine park in Canada. He was involved in the death of a part-time trainer at that park in 1991, according to reporting by Outside magazine. After that, Tilikum was transferred to SeaWorld.

Time with mother in the wild: Decades, if not for life. Orca pods are matrilineal, which means that sons and daughters stay with their mothers for a lifetime. This is true of most resident killer whales, which are groups that stay in one region. Some killer whales are transient, however, and travel long distances in smaller groups, or even solo. Even transient males usually stay with their mothers, though, according to the conservation organization Wild Whales; when one male orca is solo, it usually means his mother has died. Male killer whales don't reach full sexual maturity until about age 25, according to the Center for Whale Research.

Diet: Between 1 percent and 3.5 percent of his body weight in herring, smelt and squid per day, according to SeaWorld. For a big whale like Tilikum, that translates to between 125 and 438 lbs. (57 and 199 kg) per day.

Diet in the wild: The diets of killer whales vary by region, according to NOAA. The animals may eat anything from seabirds to seals to fish to other whales.

Human deaths associated with Tilikum: Three. Tilikum was one of three orcas in a tank at Sealand of the Pacific in 1991 when a part-time trainer named Keltie Byrne fell into the enclosure. The three attacked and drowned her. In 1999, at SeaWorld Orlando, a man named Daniel Dukes entered Tilikum's tank after closing; it isn't known whether Tilikum killed Dukes, but the man was found drowned, mutilated and draped over the whale the next morning. Most notoriously, Tilikum dragged SeaWorld trainer Brancheau into the water after a show in February 2010, causing the woman's death by drowning and trauma.

Human deaths from killer whales in the wild: None