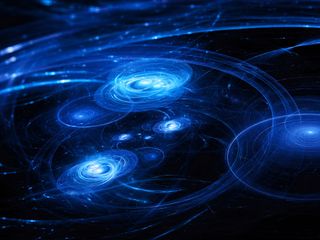 What is dark matter? New detector results have left physicists in the dark.
(Image: © sakkmesterke / Shutterstock.com)

The early universe may have contained more dark matter than there is today, new research suggests. The findings could help scientists better understand what the universe was like just after the Big Bang, researchers said.

Most of the matter in the universe seems to be invisible and largely intangible; it holds galaxies together and only interacts with the more familiar matter through its gravitational pull. Researchers call the strange stuff dark matter, and one of the biggest questions for astrophysicists is what it actually is and how it might evolve or decay. [Twisted Physics: 7 Mind-Blowing Findings]

New work by a team of Russian scientists may offer insight into that question. Dmitry Gorbunov, of the Moscow Institute of Physics and Technology; Igor Tkachev, head of the of the Department of Experimental Physics at the Institute for Nuclear Research in Russia; and Anton Chudaykin, of Novosibirsk State University in Russia considered whether some unstable dark matter might have decayed since the universe's early days, turning from whatever type of particle or particles make up dark matter — that's still unknown — into lighter particles.

"We have now, for the first time, been able to calculate how much dark matter could have been lost and what the corresponding size of the unstable component would be," Tkachev said in a statement.

Their new calculations suggest that no more than 5 percent of the current amount of dark matter in the universe, could have been lost since the Big Bang.

Besides suggesting new properties for the elusive dark matter, the work could be important in helping scientists understand how the universe has changed over time, the researchers said. For example, the findings may show how the universe's rate of expansion has varied and what happened in the universe's first few hundred thousand years, when matter as we know it started to form into atoms.

Dark matter is a kind of matter that has mass, so it exerts a gravitational pull. However, it doesn't interact through electromagnetism with ordinary matter, so it is invisible. That is, it doesn't reflect or absorb light. The lack of electrical charge also makes dark matter intangible. Physicists are still debating what kind of particles make up dark matter, but most researchers agree that the substance accounts for some four-fifths of the matter in the universe.

Researchers have said Planck telescope data shows only about 4.9 percent of the universe is ordinary matter, about 26.8 percent is dark matter, and the remaining 68.3 percent is dark energy, which accelerates universal expansion.

The finding could be important in helping scientists understand how the universe changes over time. For example, the research could help reveal the change in the rate of expansion and what happened in the first few hundred thousand years of the cosmos, when matter as we know it started to form atoms. That was the first time photons (light) could start moving relatively freely through the universe.

In its study, the team looked at data from the Planck space telescope, which studies the cosmic microwave background coming from a point located about 932,000 miles (1.5 million kilometers) from Earth. The cosmic microwave background is an "echo" of the Big Bang; it's the radiation from photons (light) that first started moving freely through the universe. By studying fluctuations in that radiation, it's possible to calculate the value of different parameters, such how fast the universe was expanding, at the time the radiation was emitted.

What they found was that the universe in its early days — about 300,000 years after it formed — behaved a bit differently than it does now. That conclusion comes from measuring the rate of expansion, as well as the number of galaxies in clusters, which are easier to explain if the amount of dark matter was anywhere from 2-5 percent greater than it is today.

To get that figure, the researchers compared the real universe with two models: one that assumed dark matter is stable and one that assumed the total amount of dark matter could change. The latter model did a better job of producing something like the universe seen today. So the early universe might have had two kinds of dark matter, the researchers said in a statement: one kind that decays into other particles and another that remains stable over billions of years.

"We are not currently able to say how quickly this unstable part decayed; dark matter may still be disintegrating even now," Tkachev said in a statement.

In addition, by looking at gravitational lensing – the bending of light by massive objects --  of the background radiation, the researchers found an upper limit for how much of that dark matter had to decay, the scientists said. The study appears in the journal Physical Review D.