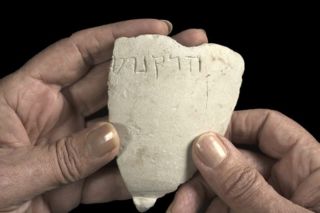 The fragment of an ancient limestone bowl that has the name "Hyrcanus" in Hebrew engraved on it.
(Image: © Israel Antiquities Authority)

The fragment — made from chalk, a type of limestone — is small enough to fit in a person's hand. But it's large enough to contain a striking detail on its side: the name "Hyrcanus" engraved in Hebrew letters.

Hyrcanus was the name of two different kings who ruled during the Jewish Hasmonean dynasty, which lasted from about 140 B.C. to 37 B.C., when Herod the Great came into power. However, Hyrcanus was also a commonly used name during that time, the IAA said. Although the name itself is Greek, many Jews used it during the Hellenistic period, The Times of Israel reported.

"This is one of the earliest examples of chalk vessels to appear in Jerusalem," Doron Ben-Ami, an archaeologist with the IAA, and Esther Eshel, a professor in the Bible department at Bar-Ilan University in Israel, said in a statement. "These stone vessels were extensively used by Jews because they were considered vessels that cannot become ritually unclean." [The Holy Land: 7 Amazing Archaeological Finds]

Researchers discovered the fragment in 2015, but the IAA decided to delay the announcement so that researchers could have time to study the artifact. The researchers noted that the fragment was found under the Givati parking lot at the City of David — Jerusalem's oldest neighborhood and one of its largest archaeological sites.

Archaeologists found the fragment under the ancient foundations of a mikvah complex, a pool used as a Jewish ritual bath. But its placement sheds little light on its past owners, the researchers said.

There are so few engraved vessels in the archaeological record from this period that it's difficult to say whether the newfound artifact was a routine creation or a special tribute, the IAA said.

"The name Hyrcanus was fairly common in the Hasmonean period," Ben-Ami and Eshel said in the statement. "We know of two personages from this period who had this name: John Hyrcanus, who was the grandson of Matityahu the Hasmonean and ruled Judea from 135 [to] 104 B.C.E., and John Hyrcanus II, who was the son of Alexander Jannaeus and Salome Alexandra; however, it is not possible to determine if the bowl belonged specifically to either of them."

The Givati parking lot also holds the remains of a famous fortress (known as the Akra or Acra), built under the rule of Antiochus IV Epiphanes, the Greek king of the Seleucid Empire who tried to control Judea during the Maccabean Revolt, the rebellion whose events led to the first Hanukkah.

The Hasmoneans eventually conquered the Akra. Intriguingly, the bowl fragment was discovered near the Akra's remains, the researchers said.