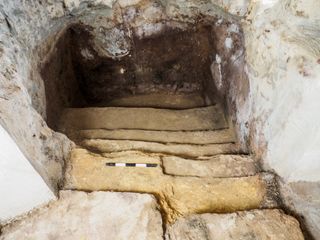 A staircase leads down to the 2,000-year-old ritual bath beneath floorboards in a family's living room.
(Image: © Israel Antiquities Authority)

A family recently discovered a large 2,000-year-old ritual bath underneath the floorboards of their Jerusalem home during a routine living room renovation, the Israel Antiquities Authority (IAA) announced today (July 1).

The ancient ritual bath, called a "miqwe" or "mikveh," was discovered in the town of Ein Karem, a neighborhood in southwest Jerusalem that claims to be the birthplace of John the Baptist. The complete miqwe was found hidden under a pair of wooden doors concealed by a rug in the family's living room, and measured about 11.5 feet long, 8 feet wide and 6 feet deep (3.5 by 2.4 by 1.8 meters).

"Such instances of finding antiquities beneath a private home can happen only in Israel and Jerusalem in particular," Amit Re'em, a Jerusalem District archaeologist, said in a statement. "Beyond the excitement and the unusual story of the discovery of the miqwe, its exposure is of archaeological importance." [Photos: Roadside Dig Reveals 10,000-Year-Old House in Israel]

Ein Karem, a mountainous region, is a sacred place for Christians not only because John the Baptist may have called it home, but also because it is where the Bible says his pregnant mother Elisabeth met with the Blessed Virgin Mary. Biblical scholars consider Ein Karem "a city of Judah" in the Book of Luke in the New Testament of the Bible, because it marked the location of John the Baptist's birth.

However, because artifacts dating to the Second Temple Period, between 538 B.C. to A.D. 70, are rare and fragmented, archaeologists were reluctant to label Ein Karem as "a city of Judah," Re'em told Live Science. "The discovery of the ritual bath reinforced the hypothesis there was a Jewish settlement from the time of the Second Temple located in the region of what is today Ein Karem," Re'em said.

The discovered miqwe was carved out of rock and plastered according to the laws of purity appearing in the Halacha — a collective body of Jewish religious laws derived from the written and oral Torah. The doors on the living room floor opened to a staircase leading down to the bath's immersion pool. Traditionally, both men and women entered the immersion pool to purify themselves after various events, like intercourse, menstruation and eating meat from an animal that dies naturally, among others, according to the Book of Leviticus, the third book of the Hebrew Bible.

The miqwe also contained pottery vessels and pieces of stone vessels from the Second Temple Period, despite evidence of a fire that may have ravaged the bath between A.D. 66 and 70.

The owners of the property said they had qualms about contacting the IAA because they were unsure of the value of their findings. "At the same time, we had a strong feeling that what was situated beneath the floor of our house is a find of historical value and our sense of civic and public duty clinched it for us," the unnamed owners said, as reported by the IAA.

A history of uncovering history

The homeowners are not alone in the discovery of an ancient room, although many reported discoveries have been the result of archaeological excavations that were undertaken prior to road construction projects, such as one from a couple years ago, when archaeologists unearthed a 2,000-year-old miqwe. Researchers determined that the miqwe, found in the southwest neighborhood of Kiryat Menachem in Jerusalem, moved rainwater from the structure's roof through channels into an underground immersion chamber. Last year, archaeologists found a 1,900-year-old miqwe along with a 1,700-year-old water cistern during a construction project to widen a highway in Judea in the southern part of Israel. The archaeologists were surprised to find those artifacts had been vandalized: Graffiti had been etched into them by Australian World War II soldiers.

Most artifacts remain untouched until unearthed, however. Last month a 3,000-year-old ceramic jar was discovered in an ancient city in which, according to the Bible, the legendary David defeated Goliath. And the month prior, a 2,000-year-old aqueduct was unearthed during a construction project in Umm Tuba, a neighborhood in East Jerusalem.

As for the most recently uncovered miqwe, the IAA awarded the owners of the site a certificate of appreciation "for exhibiting good citizenship, in that they reported the discovery of the miqwe and thereby contributed to the study of the Land of Israel," the IAA statement said.