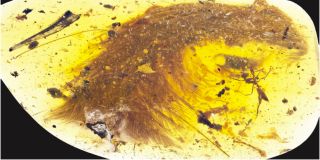 In 2016 we got "as close to Jurassic Park as we ever have," said paleontologist Scott Persons of the University of Alberta. Many other dinosaur experts agreed it was an incredible year for dino discoveries. Here's a look back at some of the most noteworthy finds.

The year got off to a strong start with the announcement of several newly found dinosaur species, such as Dracoraptor hanigani ("Dragon Robber"), Eotrachodon orientalis ("Dawn Rough Tooth from the East"), and Spiclypeus shipporum ("Spiked Shield").

Dragon Robber, also nicknamed Draco, was found within the rocks of a cliff in south Wales. It is believed to be the earliest known Jurassic dinosaur from the U.K.

David Martill of the University of Portsmouth and his team wrote that "the remains of dinosaurs in Wales are exceedingly rare." Also rare was the dino's food, since Draco enjoyed sinking its teeth into raw flesh. Draco was small for a carnivorous dinosaur, measuring just over two feet tall and 6.5 feet wide.

Dawn Rough Tooth from the East is the most complete, primitive duck-billed dinosaur ever to be discovered in the eastern United States. Dating to 83 million years ago, this herbivorous dino had sturdy teeth that could grind up even the toughest of plant materials. Called "the cows of the Cretaceous" by researcher Gregory Erickson of Florida State University, these dinosaurs once lived in what is now Montgomery County, Alabama.

Spiked Shield, as its name suggests, sported a number of bony spikes, not to mention horns. It roamed what is now Montana between 85 and 66 million years ago. Paleontologists suspect that more new dinosaur species could be found in this part of western North America in future.

Fossilized dinosaur scrape marks in 100-million-year-old Dakota sandstone of western Colorado reveal that dinosaurs engaged in mating displays that were similar to those of today's birds. The dancing dinos were likely two-legged carnivorous dinosaurs known as theropods, according to research project leader Martin Lockley and his team.

"They were evidently very active and perhaps driven into frenzies by the excitement of the breeding season," Lockley of the University of Colorado Denver told Seeker. "This is typical of some bird species. The extensive scrape evidence suggests much high energy activity. If small birds get excited when breeding, imagine what big theropods might have done!"

A voice box dating to the late Dinosaur Age 68 million years ago suggests what some animal vocalizations were like then. The organ, nicknamed the "squawk box" by scientist Julia Clarke and her team, belonged to the prehistoric bird Vegavis iaai. Clarke of the University of Texas at Austin thinks that the bird could honk loudly, similar to today's ducks and geese. She and her team also shared ideas on what non-bird dinosaurs might have sounded like.

"We propose that most dinosaurs may have lacked a syrinx," Clarke told Seeker. "This does not mean that they were silent. Crocodiles produce low frequency sounds with a closed mouth. Most dinosaurs could have used the crocodile approach with a larynx (voice box) and made these kinds of sounds."

A pregnant T. rex was one of the breakthrough discoveries of 2016. Her extraordinary remains, unearthed in Montana, shed light on the evolution of egg-laying as well as on gender differences between this and other meat-eating dinosaur species. For example, Lindsay Zanno of North Carolina State University told Seeker that we now know extinct dinos inherited egg laying from their ancestors, just as birds inherited this reproductive strategy from their dinosaur forbearers.

The unfortunate T. rex mom-to-be was between 16 to 20 years of age when she died of as-of-yet unknown causes. We haven't heard the last about her, since future studies on her well-preserved remains are in the works.

Some of the world's largest dinosaurs gave birth to dog-sized babies, according to research describing the remains of a baby titanosaur. Adults of this same species could grow to lengths of 49 feet, making the parent-to-baby size comparison all the more startling. The titanosaur tot was precocious, such that it required no parental care at birth.

"This tiny titanosaur lived around 67 million years ago, at the very end of the age of dinosaurs in the Latest Cretaceous," vertebrate paleontologist Kristina Curry Rogers of Macalester College informed Seeker. "At the time it died it died it was just a few weeks old, and was about the size of a golden retriever, though with a long, thin neck and a tiny skull, and a long slender tail."

Tiny Arms Were All the Rage

A new dino with tiny T.rex-like arms was announced in 2016. Named Gualicho shinyae, it had something else in common with T. rex: a love of meat. Akiko Shinya, The Field Museum's chief fossil preparator, found the dinosaur's remains during an expedition in northern Patagonia. It's hoped that future studies on this dinosaur and others could show how shortened forelimbs evolved.

"We found Gualicho at the very end of the expedition. Pete (colleague Peter Makovicky) joked, 'It's the last day, you'd better find something good!' And then I almost immediately was like, 'Pete, I found something.' I could tell right away that it was good," Shinya recalled about the find.

One of the most impressive dinosaur finds, not just for 2016 but for all time, was the discovery of the first known fossilized dino brain tissue. A paper documenting the fossil reports that it contains some of the meninges that surrounded the dinosaur's brain, as well as strands of collagen and blood vessels. Structures that could represent tissues from the brain cortex—its outer layer of neural tissue—interwoven with delicate capillaries, also appear to be present.

Co-author Alex Liu of Cambridge's Department of Earth Sciences told Seeker, "The chances of preserving brain tissue are incredibly small, so the discovery of this specimen is astonishing."

For years to come, dinosaur enthusiasts will be talking about a bloody feathered dino tail found in amber. The extraordinary discovery marks the first time that dinosaur skeletal material has been identified in fossilized tree resin. This form of preservation makes for great viewing, since practically every detail of the tail is evident.

Scott Persons of the University of Alberta, who co-authored a paper on the specimen, told Seeker: "Per pound, it is the most incredible fossil I have ever seen." Co-author Ryan McKellar added, "Previous finds in amber have included isolated feathers that may have belonged to dinosaurs, but without an identifiable part of the body included, their source has remained open to debate."

They and their colleagues believe that the tail, which retains some of the original iron from dinosaur blood, belonged to a young carnivore that lived 99 million years ago. Insects were trapped with the tail, and can also be seen in the amber.

Moment of Death Frozen in Time

The well-preserved remains of a dinosaur nicknamed "Mud Dragon" likely freeze in time the death pose of the animal after its agonizing final breaths. The new species, Tongtianlong limosus, was discovered lying in southern China rock that formed from what was once hardened mud.

"It is one of the most beautiful, but saddest fossils I've ever seen," Stephen Brusatte of the University of Edinburgh, who co-authored a paper on the dinosaur, told Seeker. He added that if the dinosaur had not died stuck in mud "we wouldn't have this gorgeous fossil."

The Chicxulub asteroid that slammed into Earth 66 million years ago could have immediately burnt some dinosaurs and other animals to a crisp, suggests a paper published in 2016. The impact occurred at the worst possible spot: an oil-rich location.

"The stratospheric soot was ejected from the oil-rich area by the asteroid impact and was spread globally," co-author Kunio Kaiho of Tohoku University informed Seeker.

As for the dinosaurs that were not immediately killed by the asteroid, drastic climate change following the asteroid strike would have led to loss of soil moisture and vegetation in many areas, Kaiho and his team believe. He said that plant-eating dinosaurs would have consumed the ever-decreasing available plants, resulting in the eventual disappearance of such food, "similar to overgrazing leading to desertification today."