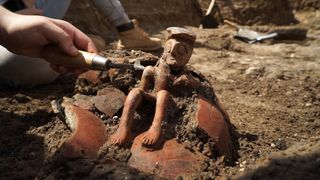 This ancient "pensive" figurine was discovered atop a pottery vessel in Israel.
(Image: © EYECON Productions, courtesy of the Israel Antiquities Authority)

A ceramic vessel bearing the sculpture of a pensive-looking figure has been found in the Israeli city of Yehud.

The vessel dates back about 4,000 years, according to the Israel Antiquities Authority (IAA). Archaeologists found the artifact during excavations in advance of a new housing development.

"It seems that at first the jug, which is typical of the period, was prepared, and afterwards, the unique sculpture was added, the likes of which have never before been discovered in previous research," Gilad Itach, the IAA excavation director, said in a statement. [See Photos of the Sculpture and Vessel from Yehud]

The unusual vessel is only about 7 inches (18 centimeters) tall. The container itself is an oblong oval shape, while the figure atop the vessel sits with one arm resting on its knees and the other propping up its chin.

"The level of precision and attention to detail in creating this almost 4,000-year-old sculpture is extremely impressive," Itach said.

Researchers discovered the vessel alongside other items, including arrowheads, an axe head, sheep bones, daggers and what appear to be donkey bones. These were likely funerary objects, originally buried alongside the body of an important person, Ministry of Education official Efrat Zilber said in the statement.

"To the best of my knowledge, such a rich funerary assemblage that also includes such a unique pottery vessel has never before been discovered in the country," Zilber said.

Archaeologists discovered the unusual jug in fragments, and IAA conservators restored it. The neck of the jug provides the "seat" for the pensive figure, Itach said. The archaeologists said they aren't sure whether the original potter made the figure or if some other artist decided to add an embellishment to the plain jug.

The artifact comes from around 2000 B.C., the Middle Bronze Age in the Levant (the region including modern-day Israel and the eastern Mediterranean). According to the Metropolitan Museum of Art, this was a time when nomadic people called Amorites settled throughout the northern part of the region and when traders shuttled back and forth between the Levant and Egypt.

High school students assisted with the IAA excavations, as part of the Land of Israel and Archaeology Studies program, a training course for students interested in archaeology. In the IAA statement, one of those students described the moment of the discovery.

"Suddenly, I saw many archaeologists and important people arriving who were examining and admiring something that was uncovered in the ground," said Ronnie Krisher of Roeh Religious Girls High School in Ramat Gan. "They immediately called all of us to look at the amazing statuette and explained to us that this is an extremely rare discovery and one that is not encountered every day. It is exciting to be part of an excavation whose artifacts will be displayed in the museum."