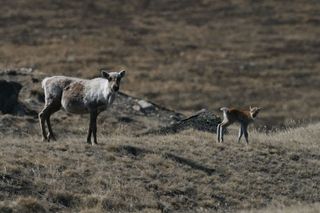 An adult female caribou and her newborn calf in Greenland during 2008-2009. Caribou numbers have been declining as a result of climate change.
(Image: © Eric Post, Penn State University)

The dramatic changes sweeping the Arctic as a result of global warming aren't just confined to melting sea ice and polar bears — a new study finds that the forces of climate change are propagating throughout the frigid north, producing different effects in each ecosystem with the upshot that the face of the Arctic may be forever altered.

"The Arctic as we know it may be a thing of the past," said Eric Post of Penn State, who led an international team that brought together research on the effects of climate change from ecosystems across the Arctic.

The study, detailed in the Sept. 11 issue of the journal Science, is one of the first to knit together and bring light to the details of the multitude of changes from across the region.

"Usually, when people talk about declines in the Arctic, they show a figure with declining sea ice extent and then show a picture of a polar bear. This study tries to move beyond such recourse by citing the wide array of papers that quantify ecological decline in the Arctic," said Ken Caldeira of Stanford University, who was not involved in the study. "I know of no similar paper that brings together such a wealth of scholarship on the state of Arctic ecosystems."

While the Earth on average has warmed by about 0.7 degrees Fahrenheit (0.4 degrees Celsius) over the past 150 years, the Arctic has warmed by two to three times that amount.

This amplification of the global warming signal in the Arctic is partly the result of a self-feeding cycle: As sea ice melts, the oceans absorb more heat from the sun's rays, causing less ice to re-form come winter.

In the last two to three decades alone, the amount of ice covering the Arctic at the summer minimum has declined by about 17,000 square miles (45,000 square kilometers, or about the size of Vermont and New Hampshire combined) a year, the researchers say, in addition to breaking up earlier in the season and freezing back later.

Snow cover over land has also decreased in the northernmost latitudes, as well as melting earlier come spring.

These physical changes to the environment are having a profound impact on the flora and fauna that dwell in the Arctic.

"Species on land and at sea are suffering adverse consequences of human behavior at latitudes thousands of miles away," Post said. "It seems that no matter where you look — on the ground, in the air or in the water — we're seeing signs of rapid change."

Arctic species that are dependent on the stability and persistence of the ice sheet — of which the polar bear is the most widely-recognized example — are particularly feeling the brunt of climate change. The loss of sea ice is causing a rapid decline in the number of ivory gulls, Pacific walrus, ringed seals, hooded seals, narwhals, and of course, polar bears.

Polar bears and ringed seals both give birth in lairs or caves under the snow. If these refuges collapse in unusually early spring rains, the newborn pups end up lying exposed on the ice, where they die from hypothermia or predation.

Other species are being threatened by the northward migrations of species once confined to more hospitable lower latitudes. One of the most visible invaders is the red fox, which is displacing the native Arctic fox.

The winter moth, which defoliates mountain birch forests, has also been marching poleward, as have Low Arctic trees and shrubs, which affect the dynamics of an ecosystem. Adding more shrubs and trees to the landscape promotes deeper snow accumulation, which increases winter soil temperatures. Warmer soils mean more microbial activity, which makes the habitat even more suitable for shrubs.

The addition of shrubs also propagates changes throughout the ecosystem and affects the ability of the tundra (or frozen soil) to store carbon: While more shrubs may lengthen the period of the growing season when the soil acts as a carbon sink, it also provides more food for grazing musk oxen and reindeer, who limit the carbon-soaking ability as they trim the plants. Grazing, trampling and defecation by herbivores also promote the growth and spread of grasses, which attract geese. Geese, in turn, can influence the productivity of lakes where they rest and graze.

Good for me, bad for you

The changes in Arctic ecosystems can have opposing impacts on different species, with some even benefiting from them.

The study found that wild reindeer on the Norwegian archipelago of Svalbard benefit from earlier snow melt. With less snow on the ground and a longer growing season, the nonmigratory reindeer can take advantage of an explosion in plant abundance. The result is more reindeer, as they are more able to reproduce and less likely to die.

On the losing side of the equation are migratory caribou in Low Arctic Greenland, whose numbers the researchers find are declining. The caribou haven't been able to adjust their calving season to keep in step with the change in plant season, so new mothers in need of more food have less available and more calves die. Hotter summers may also bring more insects and parasites to prey on the caribou.

The reduction in caribou numbers in turn impacts the local indigenous human populations: "Inuit hunters at my study site in Greenland have all but given up on hunting caribou there," Post said.

Understanding why some ecosystems benefit or are less impacted by climate change while others are on the brink of collapse is one area that the researchers say needs more attention.

Documenting the changes in this region is also key to developing any conservation plans, particularly because there are relatively few species in the Arctic.

"There is little functional redundancy among species in Arctic ecosystems," Post said. "Therefore, relatively small shifts in species ranges or abundances may cause fundamental changes in a unique ecosystem that also is important for tourism and traditional cultures."

The rapid changes in the Arctic also provide a way for scientists to tackle a long-standing problem in climate research, predicting what will happen to ecosystems in a warming world, Caldeira said. While some predictions, such dipping polar bear numbers from sea ice melt, are more predictable, others, such as the dynamics between shrub growth and grazing, are harder to predict.

"The Arctic is, unfortunately, a good early laboratory in which to test our predictions of ecosystem response to global change," Caldeira told LiveScience.

To better understand the changes taking place in the Arctic — and the Earth as a whole — the team proposes a series of studies across the region to monitor the drivers of climate change and the biological responses to them over the long term.

"We've seen a great deal of emphasis recently on the melting of Arctic ice," Post said. "The broad, rapid, and in some cases devastating changes documented in this paper remind us of why it's important to give consideration to the consequences of rising temperatures."

The study was supported by Aarhus University, The Danish Polar Center and the U.S. National Science Foundation.