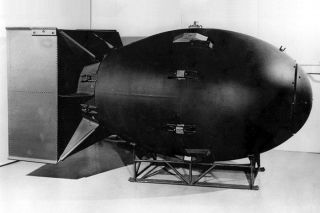 A man diving off the coast of British Columbia, Canada, may have stumbled upon a nuclear weapon that the United States lost decades ago.

Now, the Royal Canadian Navy is scoping out the strange object to see if it is indeed a Mark IV bomb that was jettisoned by an American pilot in 1950 just before his plane crashed.

The man, Sean Smyrichinsky, was using an underwater scooter to hunt for sea cucumbers near Pitt Island, when he came upon a weird bagel-shaped object. After straying from his boat, he came upon a bizarre object that looked a bit like a half-cut bagel the size of a king-sized bed, he told CBC. [Flying Saucers to Mind Control: 7 Declassified Military & CIA Secrets]

"I came out from the dive and I came up and I started telling my crew, 'My god, I found a UFO. I found the strangest thing I'd ever seen!' Smyrichinsky told CBC. "It resembled, like, a bagel cut in half, and then around the bagel these bowls molded into it."

When he came to shore, he started asking around. He soon came upon the strange tale of the Convair 36-B, a bomber that took off from Elison Air Base in Alaska in 1950 and was flying near British Columbia when its engines caught fire. The plane was testing how well it could carry a Mark IV "Fat Man," an 11,000 pound (4,900 kilogram) atomic bomb similar to those dropped in Hiroshima and Nagasaki, according to news.com.au.

The official story was that crew parachuted to safety and the plane itself sank in the Pacific Ocean.

However, a few years later, people stumbled across the plane wreck in the remote B.C. mountains, three hours inland from where it was supposed to have crashed, according to " Lost Nuke: The Last Flight of Bomber 075," by Dirk Septer (Heritage House Publishing 2016).

"After years of silence, the United States finally admitted to losing its very first nuclear bomb; the incident was its first Broken Arrow, the code name for accidents involving nuclear weapons," Septer wrote in "Lost Nuke."

One mystery remained, though: Did the bomb detonate in the ocean or blow up over the mountains?

After Smyrichinsky heard the story, he Googled the bomb and found an image that looked strikingly like the object he found.

Though finding a nuclear weapon sitting neglected in the ocean is scary, even if the strange object is the actual lost bomb, it likely contains no radioactive material. The original Mark IV bomb was a dummy capsule, Major Steve Neta of the Canadian Armed Forces, told CBC.

Finding a weapon under the waves is surprisingly common. The ocean is littered with nearly 5 million tonnes of chemical weapons lost between 1919 and 1980, according to Hakai Magazine.